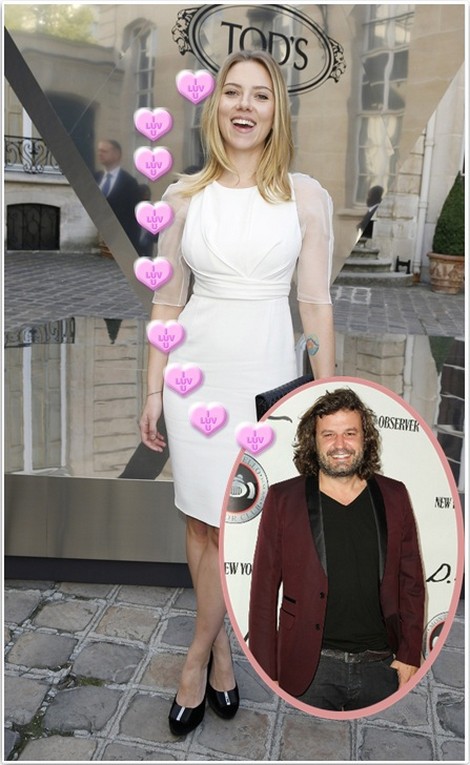 Blonde, brunette and redhead bombshell Scarlett Johansson has thrown out her line and caught a new love, artist, Domingo Zapata. Following her October breakup from advertising executive Nate Naylor, (which, of course, had absolutely nothing to do with ex-husband Ryan Reynold’s marriage to Gossip Girl’s Blake Lively), Scarlett rebounded from her rebound like a champ and began seeing Lindsay Lohan’s ex-boyfriend, Zapata. Naylor, who had been spending nights at Scarjo’s place, recently moved his things back to his apartment, ending the short lived relationship.

Zapata, 38, a Spanish-American contemporary artist with studios in New York, California, and Paris, is known for his sexual themes and taste for the young women of Hollywood. NY Magazine reports that he was most recently linked to former child star Lindsay Lohan, but Zapata has also been spotted with Real Housewives of Miami stars Lea Black and Karent Sierra, Tara Reid, and Sofia Vergara. Unfortunately, his questionable tastes extend beyond art and women. We have Zapata to thank for both lyrics featured in a 2009 remix of “Macarena” and a song written for Michael Jackson in the Spanish language.

Perhaps this time he has seen the light in Johansson and is ready for the finer things in life. According to Star Magazine Johansson has been “regularly staying” at Zapata’s penthouse apartment at the Bowery Hotel in New York. And, Zapata has not been shy about his feelings for the Avengers star, “Domingo has been telling all his friends about Scarlett — he’s crazy about her,” a friend tells Star.

But is Scarjo rushing things with Zapata? Her break up with Naylor was just last month and coincided with the marriage of her ex-husband and Green Lantern star Reynolds and his co star Lively. Surely the model/actress and one time Woody Allen muse can do better than the cast off of Lindsay Lohan. Johansson may be looking for love in all the wrong places, but at least she keeps looking. No one can ever say the starlet isn’t open to love, and Zapata may turn out to be man enough to become the next Mr. Scarlett Johansson.