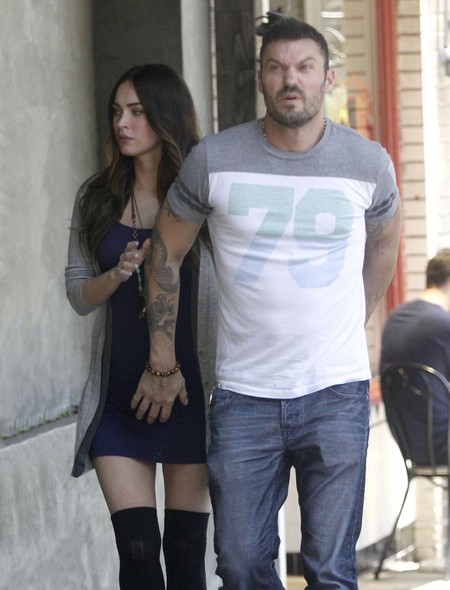 Megan Fox and Brian Austin Green were spotted in Los Feliz, California over the weekend and Brian protectively covered up the Megan Fox baby bump – his wife’s little bun in the teeny weeny oven.

The buxom beauty looked stunning in a purple mini dress, gray sweater and knee-high socks. The Transformers star was asked in March whether she likes kids and she answered with, “Yes! I’ve always loved kids!”

The pregnancy was supposedly planned as a friend of the couple recently revealed, “The pregnancy was planned. She has wanted kids with Brian for a while now. Brian knows Megan is mom material. She is amazing with Kassius.” This refers to Brian’s 10 year old son, and stepson to Megan, which he had with ex-General Hospital star Vanessa Marcil.

We’re not writers who enjoy looking at photos of ugly couples, but there’s something really scarily wrong with Brian Austin Green’s face in the photos which were snapped of the couple. He looks like he smelled the stench of a thousand year old dead person and she can’t seem to bend her arm lower than her face. We can only suspect what happened to the poor Paparazzo who dared attempt to take photos of Megan. Brian is not someone we’d want to mess with, not even in broad daylight, at a public place, so good on you anonymous Paparazzo for being so brave.

We can just imagine (or use Photoshop) as to what their baby might look like. We’re not talking Rosemary’s Baby here, even though the couple looks like a bad episode of Quantum Leap, Megan’s genes should be stolen by a covert government and used to overthrow the world. Seriously, with all the celebs we cover on a daily basis, Megan looks like a Photoshop replica of herself.

Readers, what do you think will the baby look like? More like poo-poo daddy or more like yum-yum mommy? Let us know in the comments below. 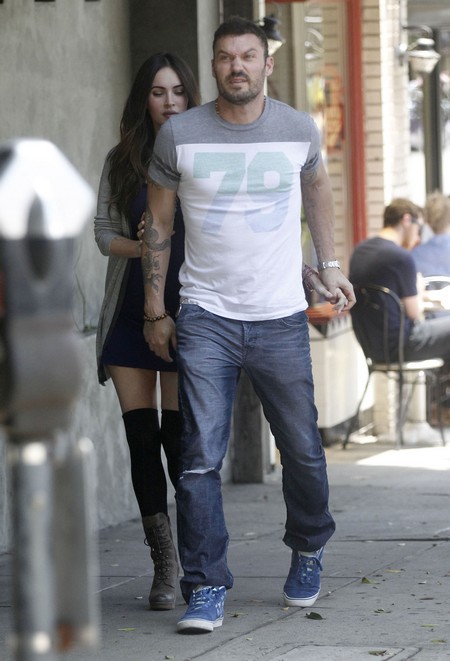 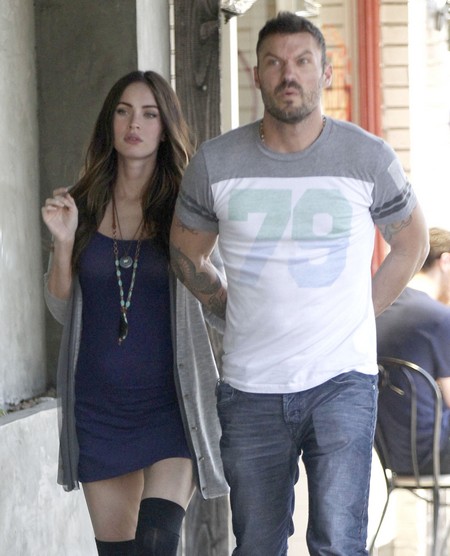