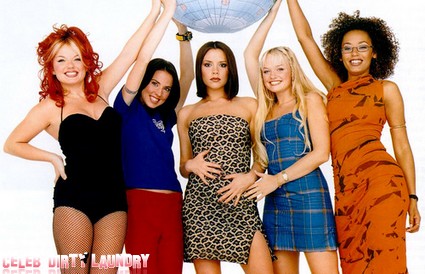 Ginger, Sporty, Scary, Baby and Posh are getting back together! The Spice Girls will reform for the Queen‘s Diamond Jubilee Concert in London this coming June. How do we know? Mel B let the big news slip during a TV interview.

As we reported on Celeb Dirty Laundry last week rumors were rife the famous five would reunite for the London Olympics opening ceremony later this year. But Scary Spice set the record straight when that question was put to her on Aussie TV  show Sunrise ‘Well, we do have the Queen’s Diamond Jubilee coming up‘.

The outspoken Spice then realised she’d said too much ‘Did I really say that? I am going to be in such strife for saying that. It’s all so totally bloody top-secret still‘ That’s OK Mel – your secret is safe with us!

The British girl group haven’t performed together since the wildly successful 2007/08 Reunion tour. It’s often been said Posh Spice – Victoria Beckham – is not interested in reliving her former life as a pop singer. She’d rather concentrate on her family and fashion label. Mel B is quite the opposite ‘I’m always down for a Spice Girls reunion. For me to get my Scary hair on and my big platforms… [I’d do it] any time of day… I’m a Spice Girl through and through‘

So Girl power will return in 2012. We can’t wait to see the original fab five back on stage doing what they do best. And we can thank the oldest Spice fan we know, for making it all happen – Her Majesty!