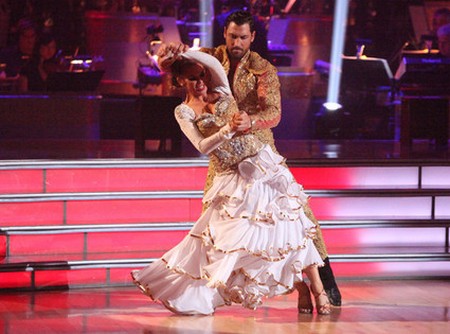 On last night’s episode of Dancing with The Stars they aired some rehearsal footage of Melissa Gilbert and Maksim Chmerkovskiyduring their rehearsal.  In the clip that they showed Melissa and Maks were arguing back and forth because Maks became frustrated by Melissa as they practiced her Viennese Waltz.  In the clip they showed Melissa said “You don’t inspire confidence in me.” Maks replied, “It could be worse.” “How?” Melissa asked. “You could have an ugly partner,” Maks joked.

But seriously the couple were so unhappy about the portrayal of their relationship Melissa she felt the need to issue it to the audience saying“85 percent of our experience last week was fantastic and what you saw was not that percentage.”

Speaking to Us Maks said: “Well, I could get mad. I could be upset about this. But actually, I think no one else’s negative moments are light enough for TV.  Mine are the lightest that you can broadcast. The rest are so bad you can’t show them on TV. That’s my story and I’m sticking to it.  There was a lot of expectations, we had to work really hard, we’ve been on this consistent run and we had a lot to prove tonight,” she said. “So I had to work extra hard and it’s frustrating and I’m tired! And to motivate me, that’s how we do it.”

Melissa feels the footage is counterproductive, silly and she just does not get why DWTS portrays them the way they have.  I can give Melissa a hint, ratings!  The show feels a little drama helps the ratings.

If you missed the show last night you can read our full and detailed recap here.  If you missed Melissa or any of the performances, go HERE to see all the videos!

What do you think is DWTS editing the show to give us more drama?  Hit the comments and let us know.