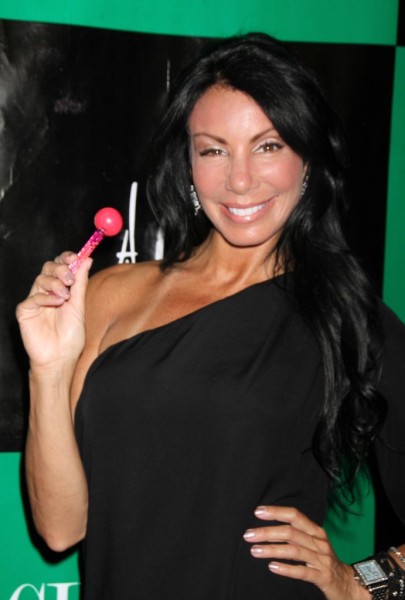 Melissa Gorga may be making a new friend. Rumors are coming out of New Jersey that Bravo is bringing back one of the original Real Housewives of New Jersey, Danielle Staub. Danielle was bounced from the show at the end of season 2 when Caroline Manzo told Andy Cohen she would quit the show if Danielle was brought back for season 3. Melissa joined the show in the wake of Danielle’s departure.

Melissa was quoted in In Touch magazine as saying she is not afraid of Danielle and is even looking forward to filming with her. Melissa obviously has not seen the first two seasons of her show. Danielle is a dangerous person. She has a criminal past and is surrounded in controversy.

In season 1 Danielle is trying to be close friends with Dina Manzo (Caroline’s sister) but Dina is wary of her motives. Danielle tried to get too close to Dina too quickly.  Later a family member of Caroline and Dina’s tells Caroline there is a book with references to Danielle’s criminal past. The book called Cop Without a Badge includes the events of Danielle’s arrest for kidnapping, her part in a Columbian drug cartel and being a prostitute. Her name at the time was Beverly Ann Merrill. Danielle cooperated with authorities and received 5 years probation.

We also learn about Danielle’s colorful dating life. She admits to having been engaged to be married 19 times and having phone sex with someone she met on the internet before they meet in person. One of the guys she dated while on the show Steve Zalewski was accused of shopping a sex tape of him and Danielle which was made by him. Danielle being a cougar (she was 45) probably consented to the filming of their private moments because she wanted to show off her boy toy (who was 26). At poker night with the husbands Steve says Danielle is the one who made the sex tape and sent it to him. In 2009 there would be litigation between Danielle and Steve regarding defamation of character and getting an injunction on the sale of the tape and other nude pictures Steve has of Danielle.

In the season finale of season 1 Teresa Giudice invites Danielle to dinner to be nice. Dinner doesn’t go well and Teresa would flip a table at Danielle out of anger. It is the most famous table flip in the history of television. The dinner guests include the Manzo sisters and their friend Jacqueline Laurita and their husbands. Danielle’s young daughters and Caroline’s adult children are also in attendance. When the subject of the book and Danielle having been engaged 19 times comes up in conversation all hell breaks loose. There is lots of screaming and arguing with Danielle and with each other. Any chance of a friendship between Danielle and the other ladies is dissolved. Caroline makes her famous speech saying “Let me tell you something about my family. We are thick as thieves and we protect each other to the end”. You know what else is thick? Concrete. The rumor mill was saying that the Manzos had mob connections. So far there has been no proof of the Manzo family having been involved with organized crime.

The other cast members are not Danielle’s only friends. In season 2 we are introduced to Danny Provenzano. He is an ex-con who is the great nephew of alleged mob boss Anthony Provenzano. Danny is also professional actor. He wrote, directed and stared in the 2003 film This Thing of Ours. Danielle would call upon Danny for protection from the other housewives on several occasions when she was nervous about seeing them in public. Danielle can whip up trouble with lightning speed. Who can forget the Posh fashion show where Teresa chases Danielle through the country club and Jacqueline’s daughter Ashley Holmes rips out one of Danielle’s hair extensions? Luckily the police showed up before Danny could call upon his paisans to take care of the situation.

Danielle is not all bad. If you see her with her daughters you see a mother who adores her kids. She has an open relationship with them, encourages their interests and has taught them to be very nice girls. When they were friends, Danielle was a huge support for Jacqueline. There were several times when Danielle did not deserve the crap she was dished out by the other ladies, and definitely did not deserve to be betrayed by her close friend Kim Granatell. People just love to hate Danielle and feel she deserves whatever they want to do to her.

I hope Danielle does come back to the show. I want her to team up with Teresa to go against Caroline. That holier than thou bully needs to be put in her place. And Teresa’s family needs to pay for what they did to her the past two seasons. All of these women did to Teresa and Danielle what they claim was done to them. It’s about to get ugly. Watch out Melissa. You think you’ve been through the worst with your sister-in-law Teresa but maybe the crazy on the show is just getting started.