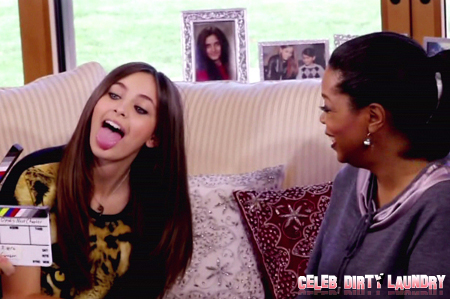 Three years after the death of Michael Jackson, arguably one of the greatest artists in the history of popular music, his 14-year-old daughter Paris Jackson is now dealing with normal teenage problems — the joyous ones as well as the tough ones.

She still misses her dad and sometimes has a hard time coping with him being gone. “He was a great normal dad. We did fun things with him like go to Chuck E. Cheese and Toys R Us.”

“When we went out without him we were normal people didn’t know who we were.” She says she was very confused when she was a kid, primarily due to her dad’s compulsive behavior mandating that they all wear masks. She now understands why her father made them wear the masks: to keep their faces shielded so they could experience a somewhat normal life, one separate from the incessant lights of flashing cameras. It’s hard to imagine having a normal life when your dad was one of the most famous people around. She even got grounded if she did something bad! Sounds normal to me.

Paris said she’s even had to deal with all sorts of bullying, including cyber bullying. She tries to stay positive and says that she doesn’t always let it get to her. But for any teenage girl, whether famous or not, these difficulties and changes associated with growing up can’t be easy to cope with.

Currently, she is pursuing an acting career, and her first movie, titled Lundons Bridge And The Three Keys–a fantasy story–will be released in 2013. She thinks acting will be fun and awesome, and I’m excited to see where her bright future will lead her.