Michelle Williams Delivers A Heart-Warming Acceptance Speech At The Globes 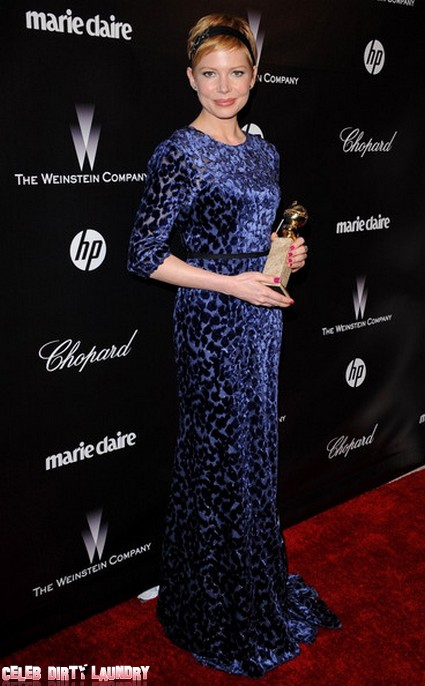 Michelle Williams is probably one of my favorite young Hollywood leading actresses – especially after falling in love with her acceptance speech during last nights 2012 Golden Globes.

Michelle won the award for her role in My Week With Marilyn, fully embodying the blonde bombshell’s soft-spoken nature and lively characteristics.

This was the first Golden Globe win for Michelle, although she has been nominated before in the past.  She looked gorgeous – almost elfin like, in a blue fitting gown, her pixie haircut (in which she keeps short because her late ex-boyfriend Heath Ledger “liked it best that way”.  Michelle proved to anyone that might have had their doubts that she’s an actress that we’ll be seeing a lot of, with the skills and talent comparable to many Hollywood female legends.

Her speech brought tears to my eyes as she spoke of motherhood and her 6-year-old daughter Matilda whom she had while still with Ledger.

“I consider myself a mother first and an actress second, and so the person I most want to thank is my daughter, my little girl; whose bravery and exuberance is the example that I take with me in my work and in my life.”

She also thanked Matilda for “sending her off to this job every day with a hug and a kiss.”  Adorable.

My favorite part was when Michelle thanked her for suffering through six months of bedtime stories read to her in Marilyn’s breathy, soft voice.  I can’t think of any other way to perfect a character.