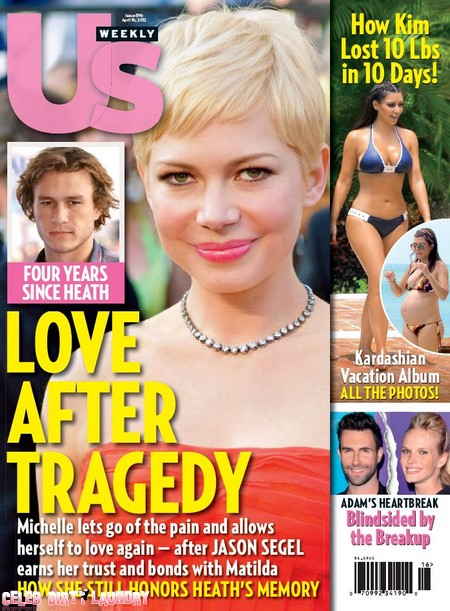 The April 16th issue of Us Magazine features the cover story ‘Love After Tragedy.’  Michelle Williams lost Heath Ledger four years ago and she has finally let go of the pain and allowed herself to love again.  Jason Segel has won Michele’s heart and her trust and Jason has bonded with Heath’s daughter Matilda.

Even though Michelle has a new love – US knows how she still honors Heath’s memory.  She has incorporated Heath into Matilda’s life as much as possible.  Photos of Heath adorn her Brooklyn home, and Matilda still has the stuffed animals given to her by Heath.

US Magazine has the scoop on the matter:  “It’s been over four years since Michelle Williams‘ ex-fiance Heath Ledger died of an accidental drug overdose — and, after several stalled relationships, Oscar-nominated actress and single mom Williams, 31, is ready to get serious with pal-turned-beau Jason Segel.  “Michelle told one friend, ‘I love him!’,” a source says in the new issue of Us Weekly, out now.  But pals say it wasn’t an easy journey for the My Week With Marilyn star, who “had a lot to recover from” as she mourned Ledger and cared for their daughter Matilda, now 6.

The sudden death at age 28 of the troubled Brokeback Mountainstar “took a huge toll on her,” another insider says. “She is a romantic and and always felt partly responsible for not being able to help Heath.”

Also included in this week’s magazine they have the Kardashian vacation album.  They have all the details on how Kim Kardashian shed 10 lbs in 10 days.  Kim wanted her best bikini bod to go to the Dominican Republic – so she went gluten-dairy and sugar free diet.  Kim also add running and Pilates to he training sessions.

If you need to find out all this and more – pick up the current issue of Us Magazine on stands now!