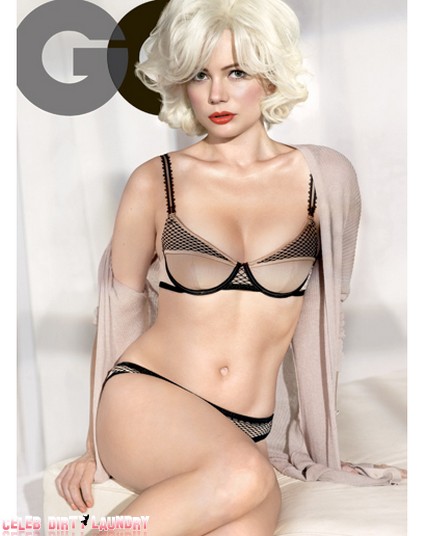 Isn’t it just perfect timing that GQ Magazine decided to release a peak of their new upcoming spread with the lovely (and gorgeous) Michelle Williams gracing the cover.  I know I spoke of Michelle and her gorgeous beauty at the Golden Globes – but can we talk about the sexy Michelle on GQ who magnificently nails Marilyn Monroe’s look??  Who knew she had that figure?  Good lawd, I think she encompasses what beauty should look like; not stick thin like we are used to seeing, but rather what a ‘true’ woman should look like.  Agreed?  Good.

So in the issue, Michelle obviously discusses her performance in her upcoming film (that garnered her the GG), My Week With Marilyn.  The 31-year-old also shared some personal details – something she normally shies away from.

On her ex Heath Ledger, they’re relationship, and his death:   “Our initial meeting, the circumstances of how we first met, were cosmic or something. Yeah, a lot of things happened at once. It’s a bit like: We had a lot of things to do, because we didn’t have a lot of time, or something.”

On Heath’s death:  “It was making me crazy. I felt like I was going crazy. It was too much—trying to deal with what had happened and trying to deal with what was at our doorstep. I just felt trapped. And it’s not just me—there’s somebody else who I’m trying to protect (daughter Matilda), and I can’t. I can’t make it stop; I can’t make it go away. Trying to find ways to explain it or shield her from it. It’s like you’re trying to go about your life, and make dinner.”

I also found it interesting how she looked at her character from Dawson Creek, Jen, and her amplified sexuality.  She said that she always saw all the negative attention and connotations that came along with it.  She also said those things “can keep people from seeing you clearly”.  Well said Michelle, you just cant say or do anything wrong in my books.