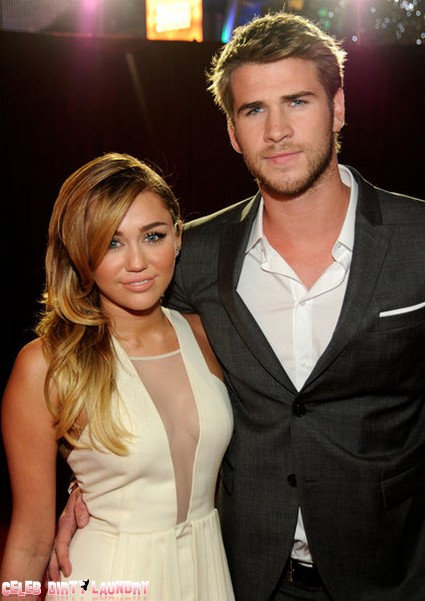 Miley Cyrus is all grown up. More proof has surfaced that the former tween star is not a little girl anymore. It’s a picture of the 19 year old making a suggestive face while posing with her boyfriend Liam Hemsworth‘s phallic birthday cake. It’s classy stuff!

TMZ uncovered the pic (here) which was taken on Saturday night in LA. The girl formerly known as Hannah Montana was celebrating her man’s birthday at Club Icon in downtown LA. Never one to pass up a photo op Miley jumped in front of the camera with the x-rated birthday cake. She didn’t just pose the once – there are several shots. She poked her tongue out and was preparing to circumcise the cake in another. What would Billy Ray Cyrus have to say about his little girl and her sweet tooth?

I suspect the red velvet cake was meant to signify Liam’s manhood. If that’s the case we can see why Miss Cyrus is hanging onto him. No photos have bobbed up with the Aussie actor and his one of a kind cake. If you’re taking bets on who blew out the candles – I’m going with the The Climb singer.

Patrons say Miley was enjoying her alcohol while she partied the night away. There are a few pictures of the teenager having a beverage. You have to wonder what other antics were captured on camera and are yet to make it online.