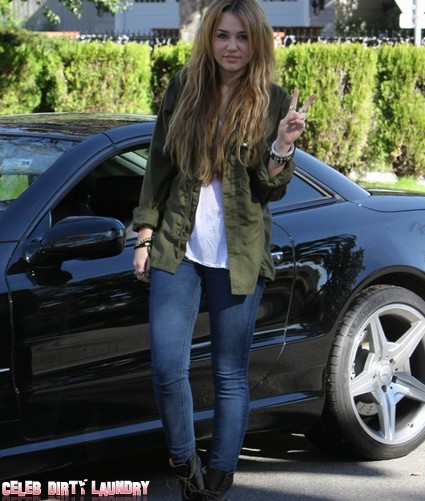 Miley Cyrus is one mega cashed up teenager. When she wants a new car she just goes out and buys it. And when I say buy it I mean she forks out  $127,000 up front for her new set of wheels.

According to TMZ that’s exactly what the Can’t be Tamed singer did in California last week. She casually dropped by a Mercedes Benz dealership and left a short time later in the drivers seat of a white 2012 SL550 convertible.  Like you do!

It was the salesman’s lucky day. It’s probably the easiest sale he had all week. Obviously the Hannah Montana residuals are still rolling in cause the former tween star hasn’t exactly been setting the box office or charts on fire lately.

So did boyfriend Liam Hemsworth tag along to give his lady’s new vehicle the once over? No. It was just Miley and her bodyguard. The bodyguard came in handy after the sale. There was no trade in so he drove her old car home. That meant the former Disney star could take a spin in her new Merc and put it through its paces. She better watch out for the Highway Patrol though – the car can go from 0 to 60 in 5.3 seconds! That’s a handy feature when the paparazzi pay you an unexpected visit – but could also be a little tempting when you’re just cruising on the 101.

At least the new car will cheer her up after Monday’s accident. Miley was goofing around at home and broke her tailbone. Was she attempting some acrobatics with Liam? The 19 year old reckons she did a front flip off her couch and landed badly.