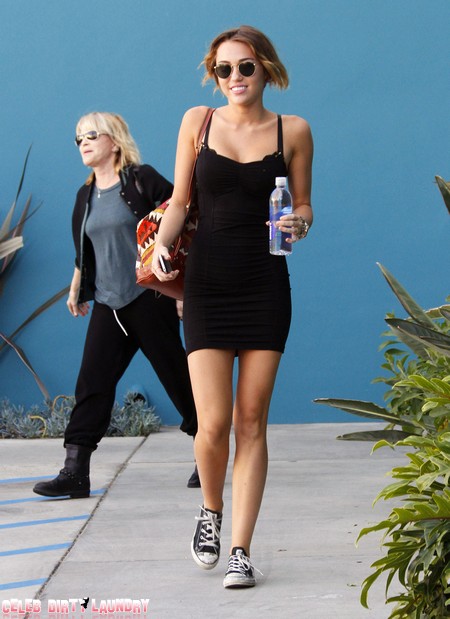 Miley Cyrus is so hungry for attention now that her boyfriend Liam Hemsworth has stolen the limelight that she intentionally flashed her naked crotch to paparazzi Friday.  Since The Hunger Games has rocketed Liam way past Miley and into first place with media and fans she has reacted like an immature spoiled brat.   The more successful Liam becomes, the wilder Miley’s behavior gets.

‘She’s willing to do anything for attention,’ an insider told In Touch Print Edition, April 16.  Miley sees that Liam’s career will eclipse her own as her next film, LOL, will get only limited release while The Hunger Games franchise is set to become the biggest success in entertainment history.  At the start of their relationship Miley possessed most of the star power but soon Liam’s clout will vastly outweigh her own.

While Liam was out promoting his new film Miley put on a raunchy show for Chris Evans at Los Angeles nightclub Hyde.  An onlooker says ‘She gave him a lap dance!’  Miley’s engagement ring Twitter stunt last month was another pathetic gesture but what she pulled Friday shows how truly desperate she has become.

As Hollywood Hiccups reports: Singer Miley Cyrus made her exit from a Pilates class in Los Angeles, California on April 6, 2012.  Photographers fighting to get that one good shoot swarmed her and accidentally (hmmmmm) caught a photo of her at the wrong time just as she was getting into her car.  Miley was commando at the time of the up-skirt.

You will be shocked at Miley’s brazen scheme to get headlines – like a disturbed child she has resorted to exposing herself for attention.  Miley needs to grow up and grow a brain.

So what do you think? Is Miley losing it or what?  Let us know your opinion in the comments below.  No pics please!