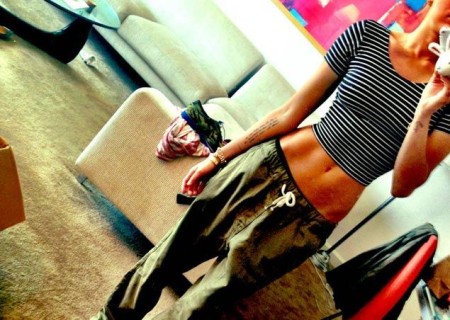 Miley Cyrus and Kim Kardashian both took to their social media accounts this week to show off their toned tummies and barely there waistlines (one more than the other) so it’s only fair that we return the favor and give them the attention they’re craving and judge the hell out of the photos.

Why be so low, b-tchy and rude, you ask? Because when celebrities post half-naked pics for all the world to see they’re asking me (and you) to judge; in fact, they’re begging for it and I’m nothing if not obliging in the early hours of Saturday morning!

OK, so first up is Kim Kardashian. Fat comments have been swirling all over the place since she and Kanye West were papped attending the  Broadway production of Fela! in NYC. She wore the most hideous and ill-fitting dress sparking debate on whether she’s doing too much happy eating with her new boyfriend. Naturally, under the guise of health, Kim quickly took to her Instagram to post her bikini pic with the caption “#nofilter #nophotoshop.” Ya, no sh-t.

I’ve got no problem with Kim’s curves. She’s obviously an incredibly beautiful woman (must prettier with less make-up on) but don’t play me like you just felt like flashing a bikini pic because you felt like laying out at the pool. She wanted to quiet the haters by showing them she’s not fat. Fine. She made her point and got more attention. Another win/win for Kim.

Now, on to Miley Cyrus. Anorexic claims are hard at work again after Miley posted yet another photo of her toned abs and shrinking waist. She’s dealt with the anorexic labels before even tweeting last April, “For everyone calling me anorexic I have a gluten and lactose allergy. It’s not about weight, it’s about health.”

After she tweeted the latest pic/conversation piece she said, “upallnighteatinchicken&waffles/makin beats.” Whatever. She’s young and her metabolism is probably crazy fast with how much she works out. It’s still annoying though. I actually think Miley’s stomach looks amazing. Her clavicles, on the other hand, gross me out. But why does she keep posting these pics when she’s knows the too skinny comments are going to come in droves? Oh that’s right. She wants them to come. She loves being thought of as too skinny. It’s like the brilliant moment in HBO’s Girls when Hannah’s enemy says, “I wanna be so skinny that people are like, ‘Do you have a disease?'” It’s gross but trust, some girls think that way.

Both women are gorgeous but obviously self conscious as all hell because, contrary to popular belief, you don’t show the world half your torso if you’re screaming with confidence. But I’m taking the question to you. You know how I feel. I think these women are pretty sad and pathetic. They say they flash these pics for their fans. They say they want to keep their fans in the loop and help them feel a part of their lives. I’m assuming you are their fans if you’re reading this. Do these pics make you feel closer to them? Does it work? Because if not, let’s call these pics what they really are – desperate cries for attention. And I just gave it to them! Ah! I’m part of the problem, not the solution! Wouldn’t be the first time! 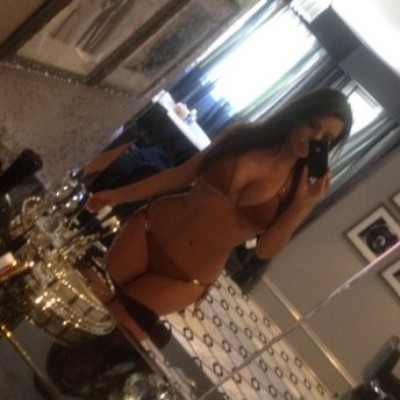