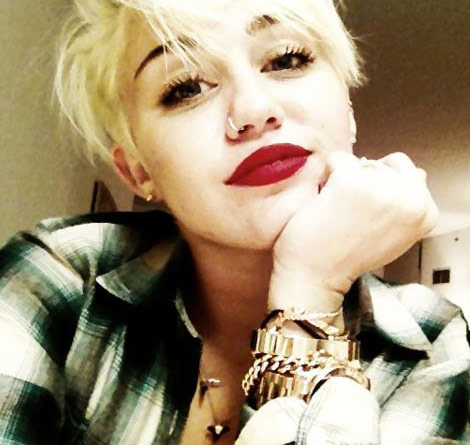 Miley Cyrus has chopped all her hair off and now she’s ready to party, party, party! Miley was seen scooting around New York city on August 23rd weaving her way in and out of hip-happening night clubs. She popped into many popular hot spots, including The Darby, where people saw Miley putting that new party-girl hairstyle to some good use. It looks like Miley cut her hair as a statement: Miley Cyrus is ready to rock n’ roll, so watch out!

19-year-old Miley reportedly cruised around in a sheer black top. First she dined at La Esquina and then she made her move to The Darby where she met up with one of her girlfriends, with whom she shared a few extra special moments. Miley Cyrus was apparently hungry for attention and began kissing the girl all over the lips. “She was trying to get everyone’s attention,” said a source.

What do you think about Miley’s wild NYC rompings? Too wild? Not wild enough? Do you think she did the right thing when she decided to chop off her beautiful Miley locks? Hair in Hollywood is often used as a tool to say something, and it appears as if Miley is trying to make a statement.

Is she going down the bad-girl Rihanna route? Or was this just a harmless one night exploration of sorts? My guess is this is just the beginning of partying Miley. Let’s just hope she doesn’t turn into my fave party girl Lindsay Lohan. While she’s one of the best celebrities out there — the Celeb World can only handle one LiLo.

So don’t get too crazy, Miley. For all our sakes. Is Miley Cyrus’ new hair an indication of what’s in store for her future?