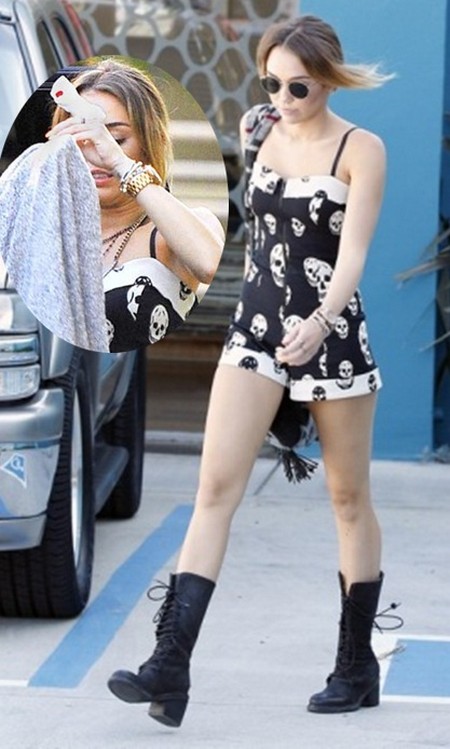 Miley Cyrus was rushed to an emergency room last night with a knife wound.  Apparently the wound was accidental and self-inflicted – she cut herself with a kitchen knife.

Miley was cooking one of her gluten-free dinners in her kitchen in Toluca Lake in the San Fernando Valley when the accident occurred.  Miley was preparing dinner when she had a slip with the kitchen knife.

We are not suggesting that this was yet another cry for attention on Miley’s part.  Miley’s boyfriend, Liam Hemsworth, her mom and grandma were there to rush her to the E.R. where Miley was treated and released.

TMZ reports: Miley Cyrus was rushed to an emergency room Monday night, after she cut herself with a kitchen knife.

We’re told Miley was cooking in her kitchen in Toluca Lake — in the San Fernando Valley — when she was preparing dinner and made a bloody slip.

Miley’s mom, grandmother and boyfriend Liam Hemsworth took her to the E.R., where doctors stitched her finger up.

In the photo, shot by Star Feine, showing Miley leaving the emergency room, you can see blood seeping through the bandage.