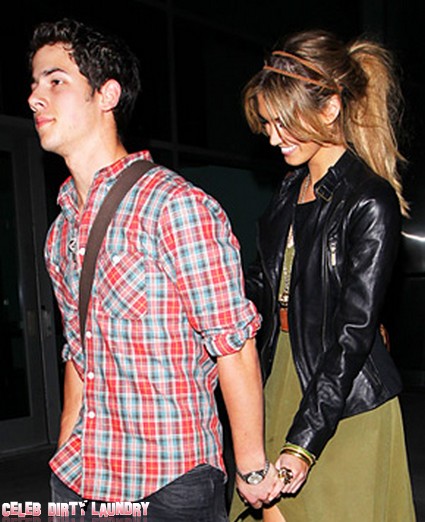 Boy bander Nick Jonas is back on the eligible bachelor list. The 19 year old has broken up with his Aussie girlfriend after less than a year. So he’s returned to the US full time and is on the prowl.

Nick had been seeing Delta Goodrem for the last 10 months. The Australian singer/actress has had a string of number one singles Down Under and is a Judge on The Voice Australia but is a relative unknown in the US. Some wondered whether the relationship was a publicity stunt to help Nick’s international profile and her singing career Stateside. The hook up raised eyebrows for two reasons –  Delta was on the rebound from a broken engagement and she’s eight years older than her former toyboy. She’s been dubbed ‘Mrs Robinson’ and a cougar.

The pair confirmed their split last night by putting out a statement. A bit OTT considering they’re no Brad Pitt and Angelina Jolie but this is what it said ‘Nick and Delta have decided mutually to end their relationship. At this point in time, they are both focused on their careers as they go on different paths. They remain friends and wish each other the best for the future.‘

Nick has had a few famous exes. There was Miley Cyrus. And Selena Gomez. Celeb Dirty Laundry recently covered Selena’s past relationship woes here Selena Gomez Forced To Be Sneaky With Previous Boyfriend I wonder of Justin Bieber has anything to worry about now that his girlfriend’s ex is single again?