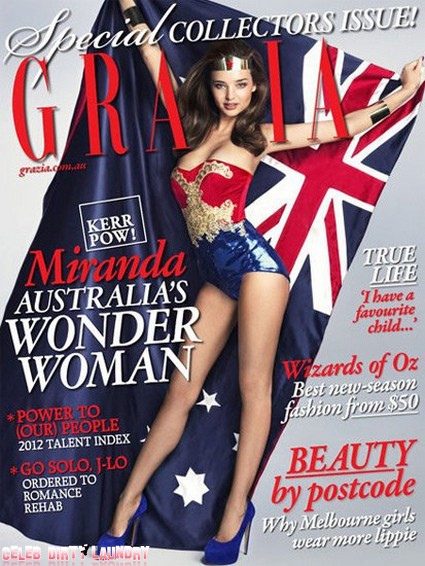 The long legged beauty appears as the iconic female character on the cover of this week’s special issue of Australia’s Grazia magazine. She’s wearing a barely there bodysuit specially designed by Alex Perry. The cover and collectors edition is celebrating Australia Day on January 26. Editor Kellie Hush says she was the obvious cover girl because she’s considered a national treasure Down Under ‘Miranda’s an Aussie icon; a businesswoman, a wife, a mum. She is our Wonder Woman‘.

Miranda is certainly a Wonder Woman in real life too – juggling family life and a successful career. She’s married to star of The Three Musketeers Orlando Bloom and is Mom to adorable one year old Flynn Bloom. One of the best looking families you ever did see!

Then there’s her work on the catwalk in New York, Paris and Milan, in front of the camera,Victoria’s Secret duties, being the face of an Aussie department store and her new role as brand ambassador for Qantas. She’s also managed to launch a cosmetics line and write a book in the last couple of years. Not to mention the constant traveling for work and play – she divides her time between the United States and her home state of New South Wales.

So move over Elle Macpherson – Miranda Kerr has officially stolen your crown as Australia’s favorite supermodel. She’s even got the costume, cape and crown to prove it!