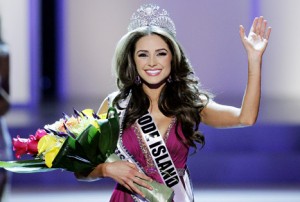 Last night a winner was crowned as 2012 Miss USA. Olivia Culpo, Miss Rhode Island took the title beating out some very tough competition. The 20-year-old will go on to represent the United States in the Miss Universe pageant.

Culpo strut her stuff during the evening gown competition where you flaunted a fuchsia gown while Akon performed and rocked a lilac bikini while Cobra Starship took the stage. Don’t get me wrong, she looked fit and fabulous, but it was the question-and-answer session that had to have locked the win in for Culpo.

Olivia was asked her thoughts on allowing transgender competitors into the competition. This question comes after a transgender woman was banned from competing in Canada, just before being allowed and then almost taking the entire competition!

Celebrity judge Rob Kardashian asked, “Would you feel it would be fair that a transgender woman wins the Miss USA title over a natural-born woman?”

Culpo’s response? “I do think that that would be fair, but I can understand that people would be a little apprehensive to take that road because there is a tradition of natural-born women, but today where there are so many surgeries and so many people out there who have a need to change for a happier life, I do accept that because I believe it’s a free country.”

Culpo is a sophomore at Boston University but will take a year off to take on her duties as Miss USA and in the Miss Universe contest that is set to take place in December.