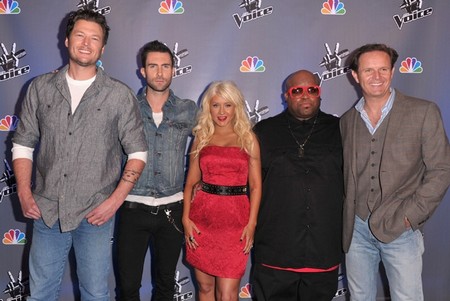 The Voice has stiff competition when it returns for its second season in early February.   It will be competing with fan favorite American Idol which is one of the most viewed shows on television.   We will be covering the show each week with up-to-the-minute results and will have all ‘The Voice” news.  So make sure and come back and visit us regularly.

The first season of the show was a hit for NBC.  Adam Levine, Christina Aguilera, country singer Blake Shelton and hip-hop star Cee Lo Green are coaches on the show as they help contestants compete against each other.  The coaches claim that Season 2 they will be tougher.  Christina Aguilera explained, “This year, we are diving more into critiquing. … You see us more in depth in the coaching process.  I think this year you’re going to see it more. Last year we were all finding our own comfort zone.”

There will also be more blind auditions, bigger teams and smarter contestants.  They  have added new celebrities who will work as advisers with the star mentors.

Adam Levine will be joined by Alanis Morissette and Robin Thicke, Cee Lo Green will have Kenny “Babyface” Edmonds and Ne-Yo,  Christina Aguilera will get assists from Jewel and Lionel Richie while Blake Shelton will get help from his wife Miranda Lambert and Kelly Clarkson.

Did you watch Season 1 of The Voice?  What did you think of it? Will you be tuning in for Season 2?  Sound out in the comments below and let us know.  Check out the preview video for the second season below.  Enjoy!