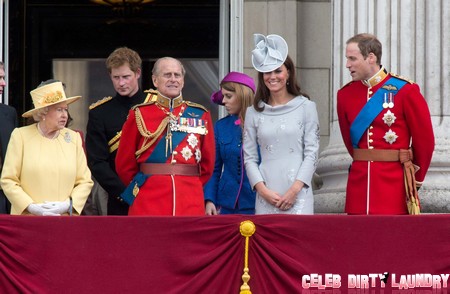 You’d think that after the awful summer the royal family has had people would be willing to lay off on hater comments, but Smiths frontman and antimonarchist Morrissey hates the Royals and sees no reason to take a break! Morrissey offered his thoughts on Prince Harry’s Vegas scandal, asking, “Can you imagine how the Prime Minister of Argentina viewed Harry in Vegas? Or the Pope? Or the Archbishop of Canterbury?…I wasn’t surprised by Harry in Vegas because he’s always been an absolute idiot.” Ouch! I mean, yes, Harry is a public figure and should understand that having public and private lives will never be possible, but we have to take his judgment errors with a  grain of salt—right??

He also called out beloved Kate Middleton, who is currently laying low after a nude photo scandal. Morrissey has been a longtime advocate for animal rights, and explained, “William shoots deer, Kate’s favorite food is the shockingly cruel foie gras, Harry shoots water buffalo.” And remember when Kate got the princes a full stock of birds to hunt on their property? Most animal rights activists would agree that private hunting is a lot less cruel or painful for animals than mass farming. Morrissey also called the royals “the most dysfunctional, unpleasant and arrogant people on the planet.”

Perhaps his most scathing review of the royals is what he thinks the monarchy is at heart. He explained, “the monarchy is foremost a business, and it’s important to them that the British public continue to finance the excessive luxurious lifestyles of the now quite enormous, wasteful, and useless ‘royal’ family. I find it very sad.”  I think that it’s easy to forget the institution of the monarchy is funded by public taxes, and perhaps it’s time for Americans to start paying into that? I would—they bring so much joy. Seeing “Princess Kate” inspires little girls everywhere!

What do you think? Is Morrissey out of line? PETA has approved of her for not wearing fur (although the same can’t be said for sister Pippa Middleton), but is it in the duty of a princess to be kind to all animals—kind of like Cinderella and her mice friends, or Snow White with her singing, laundry-doing deer? And Harry will probably never be king. Should he care what the Archbishop of Canterbury says about him? I’m doubting he’ll be looking for divine forgiveness soon. Based on his actions, he hasn’t a single care for the church’s opinions on immorality. After all, it was King Henry VIII of England’s decision to leave the Roman Catholic Church so he could get divorced! Is the immorality genetic?

But we have to ask – if the Royals do not behave in a dignified and highly moral fashion, setting a noble example for the rest of us commoners, then who needs them?  If they are just like the rest of us then what makes them royal?  They are born to incredible privilege and opportunity – wealth and power beyond what one can imagine – and this means that they do owe us an excellent show – and we don’t mean the burlesque show we’ve seen lately.