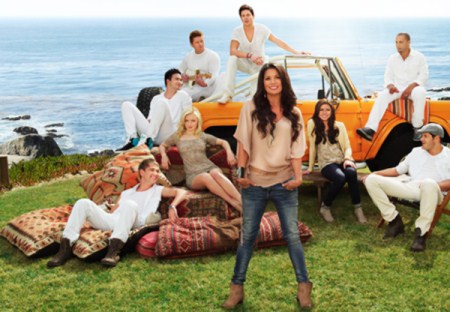 Tonight on E! is all new episode of “Mrs. Eastwood & Company”.   On tonight’s show titled “If The Nose Ain’t Broke, Don’t Fix It”  Dina gets into a fight with Francesca’s boyfriend and photographer Tyler Shields.

At this point we have yet to see more than a glimpse of legendary actor Clint Eastwood, but he’s a constant presence in conversation throughout the show.

Last week on “Mrs. Eastwood & Company” Dina’s boy band, Overtone (who she calls her adopted sons) had a gig booked in Hawaii so she planned a family vacation around the concert and invited all of Morgan’s friends to stay at the Eastwood’s vacation home in Maui.

Dina didn’t think that Francesca bringing along her unpredictable boyfriend Tyler Shields would have been a problem, but she soon learned she was wrong.

When they landed in Maui, it was only a short time before Dina had a private little chat with Francesca.  Meanwhile, we got to see the “spoiled” side of Overtone.  They were not pleased when they discovered there were only three suites for them to share and not all of them had breathtaking Hawaiian views.

In tonight’s episode Dina gets into a fight with her 18-year-old-daughter Francesca’s boyfriend Tyler, 30, that ends with someone getting a bloody nose. Meanwhile, Overtone member her Eduard is not happy about everyone getting into his business and confronts the rest of the group for interfering in his relationship with Riaan.

Tonight is going to be crazy and you won’t want to miss the episode, so be sure to tune in for our live coverage of E!’s “Mr.s Eastwood & Company” tonight at 10PM EST!  Meanwhile, while you wait for our recap hit the comments and let us know what you think of the premiere season of “Mrs. Eastwood and Company” so far!

RECAP: The show starts with Dina speaking to Tyler and Francesca. He tells her that he will sleep in a tent  if that will make her happy.

Meanwhile, Eduard is upset that he can’t show his real feelings about who he loves.

Dina is shocked to find Overtone drinking and sitting in the sun when they have a concert later that day. They tell her that they are upset that they have to share rooms.

Dina goes in to see Tyler, Domenic has a cracked rib because Tyler jumped on him when he was planking at the airport. Dina can’t believe that Tyler was such a show off.

At dinner, Tyler announces that he is going spear fishing at 6am and some shooting and wants to know who will join him. Tyler tells everyone that he set a record once, he didn’t sleep for 40 days. He then goes on with other unbelievable stories and Dina knows they are not true.

Tyler has his tent popped up for the night, Francesca did not envision that his was going to be the way they would spend their vacation in Hawaii.

The next day, at the gym, Eduard feels isolated from the band because they don’t want him dating someone in the band, namely Riaan. Eduard walks out on them.

Eduard is in love with Riaan and it could be a deal breaker as to if he remains in the band if they tell him that he can’t date him.

Everyone is at the Eastwood Mauii house and nobody knows where Eduard is.  Francesca flashes her boobs to Overtone and Dina doesn’t think it is funny. One of the girls has a bloody nose, she got hit in the face, Tyler jumps in and checks it. Dina is pissed off, she tells Tyler to go away, he has made the girl more upset because she now thinks her nose is broken because of Tyler. Dina tells Tyler to back off and screams at him. Dina thinks Tyler is a raging psychopathic liar and has had enough of him.

Dina takes over and calms the girl down, Francesca gets Tyler out of the house and away from Dina. Tyler wants to leave and doesn’t want to return, as well, he is not going to the Overtone show. Francesca doesn’t want to be in the middle of this, it is the worse case scenario to have his mom and boyfriend fight.

Meanwhile, Dina is upset that this fight is going to cause so much crap between her and Francesca.

Tyler got himself a hotel room, he’s moved out of his tent and Francesca is with him.

Dina is planning on never being in a room with Tyler again her life, so she tells Dominic.

The war is on!