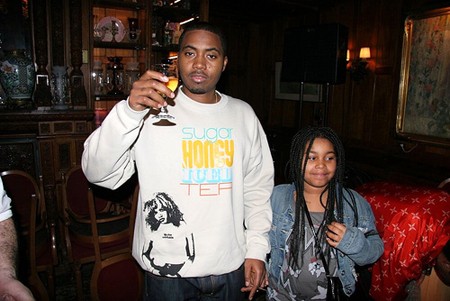 Nas has dissed his own daughter, Destiny, and the girl’s mama is ready to kill!  What the… Nas – Nasir Bin Olu Dara Jones – has really ticked off his baby’s mother Carmen Bryan in the worse way!  She is literally spitting bricks over his new song, “Daughters”.  The fans like it because it is being down loaded by the droves but she does not.  Supposedly this song is in reference to their daughter Destiny.

Carmen tweeted that the song was not right and it is totally incorrect regarding their daughter.  Nas what is wrong with you? Now you know not to mess with a mama bear and her cub, Destiny is 17 years old, because she will claw you.  Look here, this not her first time at the rodeo and Nas knows it.

In 2007 Ms. Carmen wrote a book about her relationship with Nas and her affair with Jay-Z called, “It’s No Secret”.  You know what’s no secret, is the fact that you are putting your business in the street bobocito.  A lot of celebrity parents may have problem children but they don’t put that into a rap song.

Now according to Ms. Carmen, allegedly, all these allegations that you are rapping about are not true concerning your daughter.  Destiny for all intents and purposes has been reported to be a well-adjusted kid and basically nice – which is a whole lot more than what I can say for other celebrity kids.

Now I don’t know what Mr. Nas is doing or whether he is trying to push his record sales up by creating unnecessary drama.  Nas’s record label would not comment on this crap – go figure, I wouldn’t touch this either if I were them.  Let this be a lesson, keep your personal family business at home where it belongs, not in rap or song.  That will save a lot of back peddling on behalf of your PR.