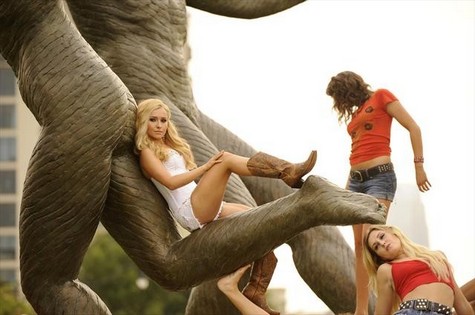 Tonight on ABC a whole new episode of Nashville called “I Can’t Help It (If I’m Still in Love with You).”  On tonight’s show Rayna and Deacon’s tangled past may steal their plan to go on the road, evan as Juliette is determined to lure Deacon into her clutches.  Did you see last week’s episode?  We did and we recapped it here for you.

On last week’s show Rayna learned that her record label wanted her to tour as the opening act for newcomer Juliette Barnes, and when she refused, the stage was set for the ultimate power struggle for popularity. Complicating matters, Lamar’s drive for power resulted in backing Teddy in a run for Mayor of Nashville, against Rayna’s wishes.

On tonight’s show Teddy’s mayoral campaign is moving ahead and Rayna reluctantly endures an investigation that reveals some explosive family secrets. Meanwhile Coleman Carlisle is starting to lay down the groundwork for his campaign when he discovers Lamar is poised to go head to head with him.

Even if it means exposing his longtime friend; Juliette, who will stop at nothing when it comes to getting her hands on Deacon, sees him perform with Rayna at the Bluebird, and it’s clear that not all feelings fade with time; and Scarlett is torn between pursuing her dream of songwriting with Gunnar and her commitment to Avery.

Tonight’s episode is going to be another great episode, which you won’t want to miss. So be sure to tune in for our live coverage of ABC’s Nashville – tonight at 10PM EST!  While you wait for our recap, hit the comments and let us know what you thought of the pilot of Nashville?

Tonight’s episode: Rayna is in the card with the kids and there is a load of traffic, Juliette is in town filming a music video. Rayna spies Juliette from the side window of the car, she’s not impressed. Meanwhile, Juliette is not happy with the young fans she is attracting.

Rayna is with her manager, Mr. White, he tells her to get back to her roots and go on tour with Deacon, it’s either that or open up for Juliette.

Teddy is not happy about Rayna going on tour with Deacon and when he says something she reminds him that she supports him with his career to be mayor.

Scarlett is torn,  she wants to write for Gunnar but her commitment to Avery is getting in the way.

At the studio, Juliette wants Deacon to finish writing a song for her and he tells her that he can’t because he is going on tour with Rayna. After practice, Juliette asks Deacon if he wants to go for a ride and Rayna overhears.

Juliette brings Deacon to a secluded area, it’s her property and she tells him that Tammy Wynette once owned it. Juliette will do anything to impress Deacon, she pulls out an old rare 1932 guitar for him to play on and then plants a kiss on him.

Rayna visits Coleman and they start talking about the big fundraiser for Teddy later that night. At the fundraiser, Rayna’s father wants to know why she went to Coleman’s house and she basically tells him she doesn’t think there is a problem with it.

Deacon and Juliette are writing the song and they have success and Juliette tells him that they could do a whole lot more if he would just go on tour with her. Juliette strips and jumps in the water, Deacon takes off his shirt and declares he is a dead man because he jumps in after her.

Scarlett is out listening to Avery play and when he is done a fan recognizes her and Gunnar who is there because she invited him and thinks they are a couple. Scarlett corrects her by saying that she and Avery are dating, not she and Gunnar. Avery is shocked and wants to know what is going on, Scarlett confesses that she sang one song with Gunnar the other night.

Deacon and Rayna have an argument over the tour when Juliette sends him a $50,000.00 guitar, she calls Juliette “Ms. Sparkly Pants”, Rayna walks out on him. Meanwhile, Juliette is still upset that she is attracting teenage fans.

Juliette goes into the studio and records her song.

Scarlett is enjoying to watch Gunnar sing and he’s thrilled that she is in the audience. The two sit outside afterwards and she tells him that she can’t do this, because of Avery – she wants a life with him and doesn’t want to do anything that will mess that up.

Rayna is not happy with Teddy’s campaign, but she is standing by his side, she is on board to support him no matter what.

Juliette finished the song, she brings a demo over to Deacon and wants him to listen to it. She asks him about the guitar, he tells her he can’t keep it and she insists that he does, then she tells him that something about him makes her want to grow up.

Lamar knows Teddy is hiding something, but he’s happy that he’s not telling, he declares that will make him a good mayor.

Deacon is at the Bluebird and he tells the audience he is going to invite someone on stage to sing with him, Juliette thinks it is her and is heartbroken when he asks Rayna. At the end of the song. Deacon touches Rayna’s hand and when Juliette sees it, she storms out.

At home, Rayna walks in and hugs Teddy, she tells him that she loves him.