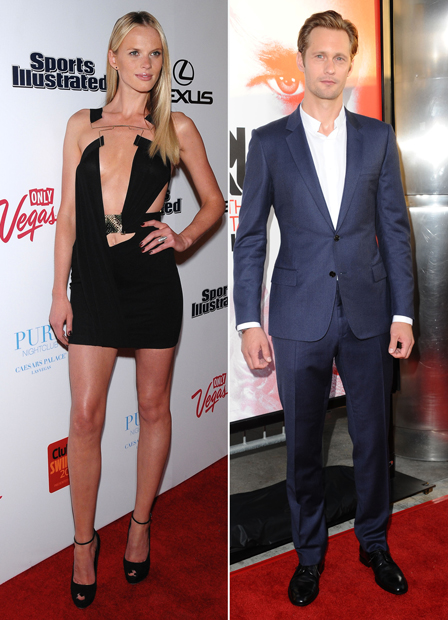 True Blood star Alexander Skarsgard and Victoria’s Secret model Anne Vyalitsyna are a couple! Yes, they are!  According to Life and Style magazine, “They got together about a month ago in NYC and are still hooking up. She’s been telling all her friends about him!”

We know Anne from dating Maroon 5 front man Adam Levine for a while and the recent split up between the two. Alex has been linked with Kate Bosworth in the past. We know beautiful people make beautiful babies and just imagine what Alex and Anne’s babies will look like! Too cute to mention!

Anne is simply known as Anne V in modeling circles and according to her Wiki page; she had a consecutive eight year run in the Sports Illustrated Swimwear Issue. Anne is Russian born and is 26 years old. Alex is best known for his appearance in True Blood as Eric Northman.

The 35-year old Swedish born actor dated his longtime girlfriend Kate Bosworth, for just over two years. He was recently seen in the Peter Berg action film Battleship alongside Rihanna. He has won several Scream Awards for his portrayal of the icy vampire Eric Northman.

Women have been obsessing over the tall Eric on True Blood, ever since the show premiered in 2008 on HBO. The show went on to win critical praise and a smattering of awards.

We suspect Anne was watching too much True Blood recently.  What do you think readers? Do you see these two as a couple or not so much? Let us know in the comments below.