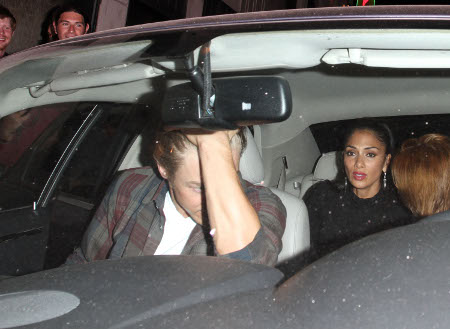 Derek Hough and Nicole Scherzinger have allegedly dated in the past, and after some recently surfaced pictures, it looks as if they’re getting pretty friendly with each other once again! The couple was photographed in a car together, with Derek in the front seat, Nicole in the backseat, and a few others on either side of them. Now, the two aren’t in a loving embrace nor are they giving each other sweet smooches on the cheek . . . but they are in the same car together and they both look like they’re desperately trying to avoid being photographed. So I have to ask the question are they dating? I think so.

Derek and Nicole first met when the two danced together on season ten of Dancing with the Stars. The two obviously had some major chemistry because the two ended up taking home the coveted mirror ball trophy and cementing their names in the DWTS‘s hall of fame. A while back, reps for Nicole stated that she was not dating this lil’ blondie, but the fact they always seem to be attached at the hip — stuck on each other like glue — doesn’t help make her case.

Derek, in the picture above, looks like he’s trying to shield his face from being photographed while Nicole wears a defeated smirk, almost as if to say, “Give it up, Hough. They caught us. We’ve been founded out!” The couple is leaving Sayers Nightclub.

So, what do you all think? LOVEbirds or FRIENDbirds? I think they make a quirky couple and, if they are dating, at least we know that they’ll be suitable tango partners. CDL‘s New Couple Alarm sounded early this morning when we first noticed the pics. Our money is on them being a couple . . . let’s see how long it takes them to come out of the Secret Celebrity Romance Closet. Nicole is a romantic mess. Reportedly, she recently reunited with ex Lewis Hamilton. Boy, this gal just can’t decide which way her heart wants to roll!