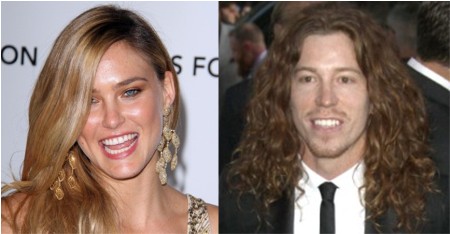 It seems as though Maxim 100’s Hottest, Bar Refaeli, has developed a taste for tomatoes because the the Israeli bombshell has been spied around town sucking face with Snowboarding king, Shaun White.

Page Six uncovered the unlikely pair at Soho lounge, Sway, over Memorial Day Weekend. A witness said they were, “dancing, hugging and kissing” until the early morning. And this was no random hook-up.

Sources say Snow God White was spotted at Spring Street club around Midnight on Monday morning and he appeared distracted, constantly checking on his phone. They soon found out why. Bar sauntered in to meet him an hour later. And then it was all about having a good time. “They were all over each other,” the source said. Bar called it a night around 3 a.m. leaving White behind to party with his friends.

This is a very different story than the one Bar was waxing a few weeks ago about how no one ever hits on the beauty. I could see White hitting on her all night long. And I see nothing wrong with this pair. Maybe it’s because I live in Colorado, where Shaun White is more revered than the president and the pope combined, but he’s kind of hot. He’s got that swinging d-ck swagger going on that I’m sure gets him laid more than most.

And I think this is cool move for Bar. She’s already dated Leonardo DiCaprio, arguably the biggest movie star in the world. Where else can she go? She needs to date someone else who’s at the top of their field. Gisele Bundchen did it. After kicking Leo to the curb she married the one guy that could actually compete with Leo’s fame. It was the greatest rebound of anyone in history. Shaun White is no Tom Brady, except when the Olympics come around, and the London Olympics start this summer. Maybe this could be Bar’s chance at greatness.