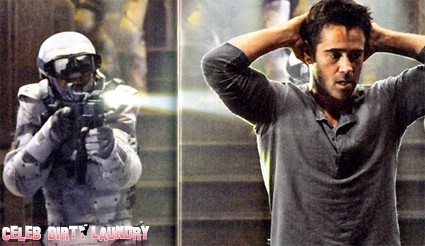 One of the most anticipated films of 2012 is the Total Recall remake. It’s due to hit theaters in August and stars Colin Farrell and Jessica Biel. The good news for sci fi fans is it’s on schedule and the teasers are looking pretty amazing.

Director Len Wiseman has been hinting at what we can expect ‘I’m very close to handing over my cut. It’s going really well. The combination of mystery and emotion and action, it’s coming together. Colin is a large part of that and I’m really happy with him‘. We’ve already been warned this will be a lot more serious than the Arnold Schwarzenegger original. There’ll be no cheesy one liners which were scattered through the 1990 film. It’s all about less jokes and more action.

The Director says it’s a complex tale ‘There’s the reality story and there’s the fantasy element. They’re running parallel together, so you always have to keep those two alive. That’s the inherent nature of the concept and what makes the concept so cool. I think the complexity of the dual stories was the most surprising and challenging thing. When you’re involved in… going back into the Philip K. Dick story, you realise there is so much to be discussed about the dual stories‘.