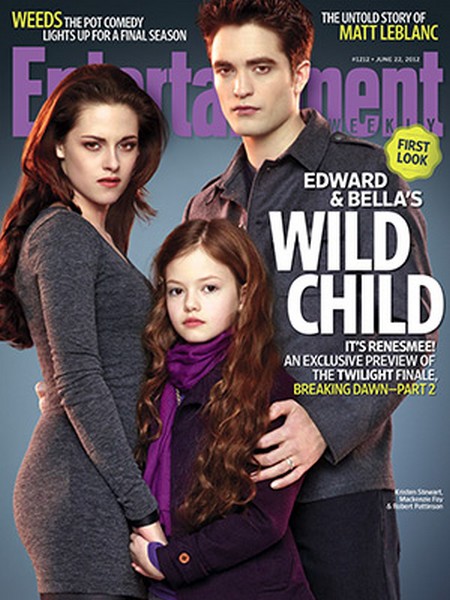 Finally the moment we’ve all been waiting for – a new picture has surfaced of the newly transformed vampire Bella (Kristen Stewart) and her brooding hubby Edward (Robert Pattinson) – as well as a sneak peek of their daughter, Renesmee.

The child vampire, played by newcomer (obviously, she’s like 5) Mackenzie Foy was cast among thousands to play the coveted role of Edward and Bella’s half human, half vampire daughter.

We last left the duo with Bella giving birth and transforming into a sexy vamp, her eyes popping open at the end of the film to reveal bright red vampire-esque eyes.  Breaking Dawn Part 2, takes place shortly after, so why is Renesmee (named after both her grandmothers) so grown up?  Well duh, because she grows at an accelerated rate, naturally.  Don’t ask what happens when her age surpasses that of her parents though, that would just be weird.  For now, at least in the last installment of the Twilight franchise, Renesmee seems to stay put at the 5-year-old age range and fans can now finally get a glimpse, albeit small, of the family unit.

The picture has the gorgeous couple (who doubted Bella wouldn’t radiate as a vampire?) looking all serious as-they-do with their daughter hiding behind them.  Bella, looking like the protective mother she is, holds her daughter’s hand as she peeks around her arm.

Have I mentioned how excited I am to see this movie?  The casting department did a good job with Mackenzie that’s for sure, her chestnut hair and pale skin resembles exactly to that of her vamp folks…love it, love it, love it!