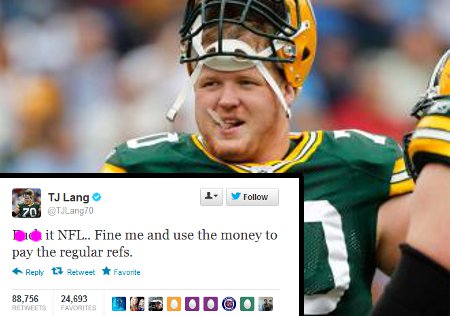 The world of football is in a state of frenzy and panic after a seemingly horrendous call was made during the anticipated game between the Green Bay Packers and the Seattle Seahawks. The Seahawks ended up taking the victory, with a final score of 14-12, but many are blaming the Packers’ loss on an extremely sketchy, lousy decision made by the NFL referees. Now, players are thinking about lashing out, possibly even going on strike, to prove to the NFL that they need to figure out this refereeing slack-off soon — not only to preserve the quality of the game but the safety of their players.

In a tweet that will now forever be remembered by the world of sports, TJ Lang said, “****It NFL. Fine me and use the money to pay the regular refs.” Many are claiming that this was the worst ref call in the history of the sport, and everyone is quite literally up in arms. On the plane ride home, the players discussed the nitty gritty details about what went down and how they should approached the issue next. Many are willing to go on strike.

“Whatever it takes, it’s just a total embarrassment to everybody watching the game, the players in the game, it’s not fun to be part of something like that … If it keeps going on, it’s going to get ugly,” Lang said during  the Valenti & Foster show on 97.1 The Ticket. “Going into a game worrying about the refs more than the other team, it’s a problem. The NFL, the commissioners, if they don’t take action after last night … That should be the last straw.”

The athlete definitely doesn’t regret any of his angry tweets, but he does say that he wished he wouldn’t have dropped so many F-Bombs. “We were furious, man, as soon as we got into the locker room we turned the TVs on, it was just heartbreaking to have the game taken from us like that. We put too much effort, blood, sweat and tears into this game to have it taken from us.”

He says that this whole controversy is turning the league into a joke and that things need to be corrected. And quick. Especially before long-lasting effects become an issue. “It’s frustrating to see the owners, the commissioners, aren’t taking any action toward it … The NFL needs to take action, it’s hard to blame these guys, it’s total confusion out there at some points for these guys. You just asked a couple of guys who have never reffed an NFL game to go out there and be perfect.”

What do you think about this NFL controversy? Do you think players should go on strike until their voices are heard? Let us know in the comments section below!