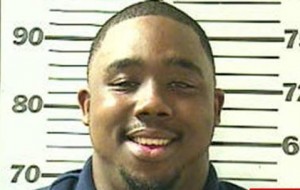 Fairley was popped in Mobile, AL just after 1:00 AM. In addition to the DUI and eluding charges, Fairley was ticketed for reckless driving, no proof of insurance and having an open container. Fairley is from the area, having gone to Williamson High School and he attended Auburn University. It’s Fairley second bust in just over a month — he was arrested on April 3 for marijuana possession.

According to the cops report, Fairley was traveling 100 mph in his car, which just so happened to be a 2010 Cadillac Escalade. He decided to smart thing to do was to pass a police car that was working Interstate 10. Then even after the cops came after him with sirens and all, Fairley must of thought he was going to be a rebel and ignore the police.

Fairley posted a $1,750 bond and was released shortly after 9 a.m. The Lions went ahead in PR mode and released the following statement, “We are aware of the reports and are in the process of gathering more information.”

Didn’t you know that if you are a wealthy professional athlete and have any sort of notoriety, the laws do NOT pertain to you? Obviously Mr. Fairley knows he is going to get out of it just like every other celebrity. Look at that cheesin’ smilin’ mug shot.