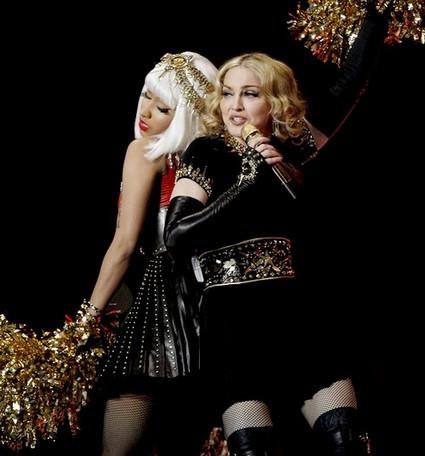 While Nicki Minaj says she is “disappointed” in M.I.A for flipping her middle finger during Madonna’s performance at the Super Bowl, she thinks The Material Girl herself is to blame.  Minaj claims that since Madonna knew what sort of nut case M.I.A. was when she allowed her to join the performance, she knew the risks involved.

The ‘Stupid Hoe’ singer told Ryan Seacrest on KIIS FM:  “In hindsight now, it’s like, you know what, Madonna knows the artist that M.I.A is, and you know, it was her decision to take the risk with all of us, we’re all kind of firecrackers, and she took that risk and she’s done some crazy things in becoming that icon that she is and I think that’s why she was able to forgive M.I.A.”

Minaj, who performed her new single ‘Give Me All Your Luvin’ (what an original title!) admits that while she is ‘cuckoo’ her respect for Madonna prevented her from doing anything rude during the Super Bowl half-time show.

She told Ryan: “My first feeling is disappointment just because – only because – of my respect for Madonna.  Even though I’m a cuckoo lady, too, but I couldn’t do it.  I could never be able to do it because of the strength of Madonna.  There are fines that go into these things.”

The Federal Communications Commission, which is in charge of handing out fines for such offences, has not yet confirmed if it will act upon the many complaints it received regarding MIA’s offensive middle finger gesture.

Madonna said about the incident on KIIS FM: “I didn’t know about it until I left. I was really surprised. I didn’t know anything about it.   I understand it’s punk rock and everything, but to me there was such a feeling of love and good energy, and positivity.  It seemed negative. It’s one of the those things, it’s such a teenager, irrelevant thing to do … what was the point?” It was just out of place.”

MIA herself claims to have flipped the bird accidentally when her nerves got the better of her. Guess Madonna won’t be inviting M.I.A. to perform with her anytime soon.