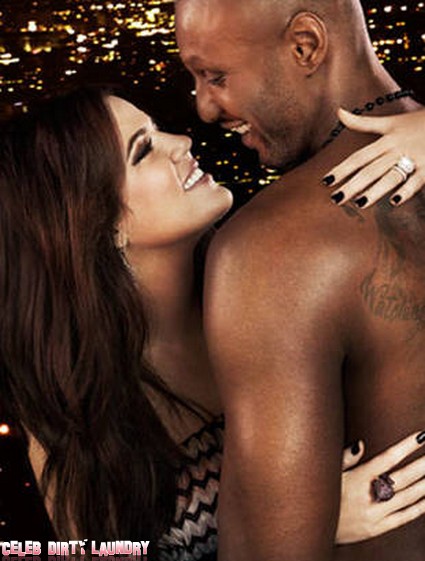 It’s all over for Khloe & Lamar – the TV show not the marriage! Khloe Kardashian and Lamar Odom have decided they don’t want cameras in their faces 24 hours a day, 7 days a week. Well, more like Lamar needs to quit being a Kardashian handbag and get his basketball career back on track before fame ruins it completely!

According to TMZ the second season of Khloe & Lamar will be their last. Lamar wants to get back to the court and focus on his ailing sporting career. Things have gone from bad to worse for the player in the last six months. Being traded to the Dallas Mavericks hasn’t worked out. He’s now on the inactive list and looking to get traded. So he’s back in Los Angeles and concentrating on giving his basketball a major kick start. That means no cameras and no distractions.

Khloe has more to lose. This show was her baby. Her chance to step out from behind sister Kim Kardashian‘s shadow and show the world who she really is. But now it’s back to designing handbags and playing second fiddle to Kim and Kourtney Kardashian. Khloe also loved the fact she was half of a celebrity couple but Kim has trumped her on that now too. Kanye West is a household name. Lamar Odom is not.

But don’t worry – the pair won’t disappear from our screens completely. They’ll still make guest appearances on ‘Keeping Up With Kardashians‘. But maybe losing a TV show will result in a baby. At least they’ll have time away from the cameras to get to work on that much longed for addition to the family.