Not Lying Like Jessica Simpson, Christina Aguilera Is Fat And Proud 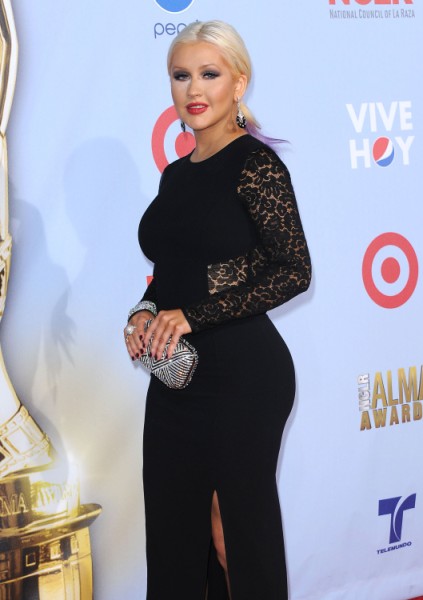 Christina Aguilera made me enormously happy this morning. Her latest interview for Billboard magazine is pretty bad ass because she’s basically telling the world “I like eating carbs. Get over it!” I think Christina could make better fashion choices that celebrate her curves. She tends to like to stuff an eight pound sausage in a five pound bag (thanks Caroline Manzo!) but hey, if she’s chubby and proud and wants to wear tight ass clothes then go on with your bad self. Here’s what she had to say:

“During the promotion of my album Stripped [in 2002], I got tired of being a skinny, white girl,” Aguilera says. “I am Ecuadorian but people felt so safe passing me off as a skinny, blue-eyed white girl. The next time my label saw me, I was heavier, darker and full of piercings! Let me tell you, that wasn’t an easy pill for them to swallow. I had gained about 15 pounds during promotion and during my Stripped tour [with Justin Timberlake, 31]. They called this serious emergency meeting about how there was a lot of backlash about my weight. Basically, they told me I would effect a lot of people if I gained weight — the production, musical directors. [They claimed] people I toured with would also miss out if I gained weight because I would sell no records or tickets for my shows,. I was young, so I lost the weight quickly and was toothpick thin during Back to Basics promos and touring…. I told them during this Lotus recording, ‘You are working with a fat girl. Know it now and get over it.’ They need a reminder sometimes that I don’t belong to them. It’s my body. My body can’t put anyone in jeopardy of not making money anymore—my body is just not on the table that way anymore.”

Pretty awesome, right? Why try to be Lady Gaga? Why try to look like you did when you were 21? It’s not realistic. Everyone should take a page out of Adele’s book. If you have talent, you shouldn’t have to sell your body. And, being a judge on The Voice aside, Christina Aguilera has mad talent and I still have hopes that her career can rebound. I still listen to Dirty whenever I’m having a lazy run. It works magic during that last mile!

So why did I have to bring up Jessica Simpson? I guess I’m making this into a tale of two self-confessed fat girls.  Besides the fact I love to point out the fact that Jessica’s a lazy liar, I can see the parallels between their stories. They’re both playing the same game right now. I don’t want to kill myself to be skinny. I want to be like the average person and I’m so much happier this way! The difference is that I actually believe Christina. Does she want to be a size 0? Of course she does but she’s basically saying she likes to eat and doesn’t like to work out so she’s cool with the results. Jessica Simpson is not cool with how things are working out for her body which is why she signed on for Weight Watchers and still tried to get lap band surgery. That is a woman who is not comfortable in her skin. She wears muumuus for Christ’s sake! Christina has never tried to hide her chub chub which has been a problem at times especially when she insists on wearing stockings and granny panties on stage.

It’s all about honesty when it comes to stars and their fans. I know they’re lying to me 99% of the time but I appreciate the ones that do it well. Christina’s selling a new record and a new confidence. I’ll bite but that album better be good because at the heart of Christina’s shpeal is that she’s selling talent – not a lifestyle! I’m always down for buying talent. I can’t remember the last time Jessica tried to acknowledge she had a talent. If you’re going to sell me a lifestyle you better own it  like Gwyneth Paltrow or even Jessica Alba. Jessica Simpson is all smoke and mirrors to me.

Do you buy Christina’s non-apology for her fuller figure?