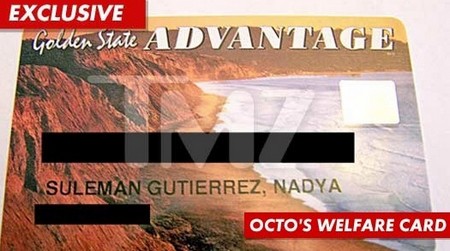 Octomom, Nadya Suleman, is now an official welfare bum.  The mother of 14 is now on the payroll of the State of California to the tune of $2000 per month but she is not an employee.  The woman who swore that she would never go on welfare after giving birth to octuplets is now on welfare.  It is hard to earn enough money to take care of a family of 15 and even though Octomom got naked for money this week the $10,000 was not enough and she still needs more.

The argument that people should not have children that they can’t support seems to be lost on Nadya.  Her case is not a tragedy of accident – it is one of arrogance and greed.  Octo’s is not the case of a single parent saddled with more expense than they can handle by circumstances beyond their control.  She deliberately and absurdly had a ridiculous number of children in the hope that she would make a fortune off of them.  Too bad, so sad… it didn’t happen.

TMZ has the exclusive:  Octomom is doing what she swore she would never do — go on welfare … TMZ has learned.  The mother of 14 is getting $2,000 a month from the State of California. The money is deposited directly into a special debit card account (see above). The card can ONLY be used for food — and it’s closely monitored by the State to make sure the cardholder isn’t making illegal purchases — i.e., buying a bike at Costco.

It’s a cruel twist, for a woman who vowed in 2010 — a year after giving birth to octuplets — she would NEVER go on welfare, saying she refused to become “a self-fulfilling prophecy” by accepting government assistance.

Octo qualified for the card because her income is less than $119,000 a year … and a family of 15 that makes less than that amount is entitled to welfare benefits.  In case you’re wondering, the $119,000 figure is based on an average of just under $8,000 for each member of the household. The more kids, the more you can make and still receive welfare.

We’re told the cash-strapped mom has taken her children out of private school, except for her one son who has autism, saving her $4,000 a month. And as we first reported, she’s even posing topless to make ends meet. But it just wasn’t enough.

Octomom is an argument for requiring parents to be licensed.  As a society we insist that people pass tests and adhere to strict rules in order to be allowed to drive automobiles.  Yet a fool like Nadya is able to bring many children into this world who are suffering right now and will undoubtedly be scarred for life.   It just doesn’t seem right.  What do you think?