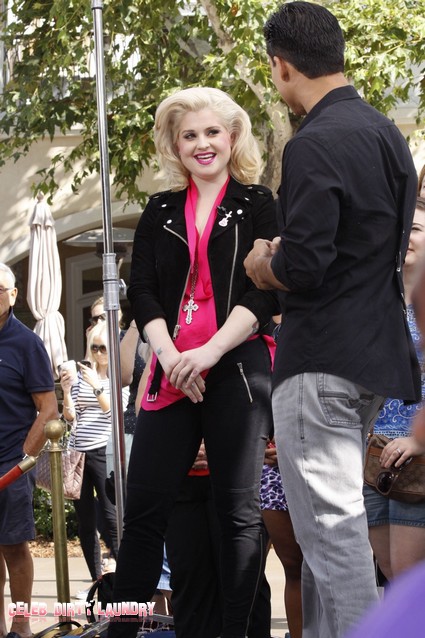 Reformed party girl Kelly Osbourne has only just finished battling rumours that she fell off the wagon at a Golden Globes after party and now there is already another story raising questions about her sobriety. Word has it that Obsbourne was spotted getting wasted at a California bar on Wednesday night where she also allegedly bought and consumed a pot-laced cookie.

RadarOnline reported this morning that Osbourne was out Friday drinking with friends at Cha Cha Lounge in Silverlake, California. Apparently, the reality star and Fashion Police host stepped outside for a cigarette and was seen buying a $10 molasses cookie laced with marijuana from a woman nicknamed “Lady Cakes.” According to the source, Osbourne “quickly stuffed [the pot cookie] in her mouth, and told the woman ‘you’re going to be my personal supplier now’.”

Osbourne, who’s been sober since February of 2009, has appeared to be the picture of health and poise lately. However, there have been several eyewitness reports that Osbourne is back to her hard-partying ways. One insider told RadarOnline “Kelly is definitely off the wagon again — at least when it comes to drinking. I’ve seen her out drinking cocktails, beer and champagne numerous times, and I’ve seen her pretty unsteady on her feet too.”

Never one to go down without a fight, Osbourne took to Twitter to fire back at such reports saying “If I want to have a drink them Im going to have a drink Im 27 years old! Was their story true? NO! is it anyones business NO? #GiveMeABreak!” She later cooled down a little and said, “Trust me I’ve worked to hard to go and fuck my life up agin you ass holes! and thats quite frankly all i have to say on this stupid subject!”

The 27-year-old has been to rehab several times in the past, mainly for an addiction to painkillers, so she may feel she’s okay to dabble in alcohol and marijuana. However, it is recommended that people struggling with sobriety should avoid any substance that could lead to a relapse or new addiction.

Off the wagon or not, all I know is that Osbourne was definitely smoking something when she opted for that grey helmet hair on the Golden Globes red carpet last week. Maybe her recent bad girl behavior is an attempt to forget her fashion faux pas!