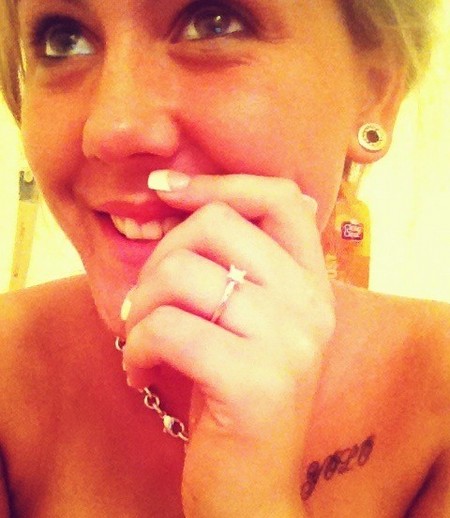 Teen Mom 2’s Jenelle Evans, 20, is now engaged to her boyfriend (or should I say fiancée?), Gary Head, a 23 year old Marine.  Jenelle revealed the news herself yesterday, when a fan on Twitter asked her ex-boyfriend, Kieffer Delp, 22, if he and Jenelle would ever get back together. “Sadly, no,” Kieffer replied.

Naturally, this prompted fans to ask if she was engaged to Gary, to which she replied, “Yes.”

This isn’t the first time the young couple, who met in January and started seeing each other a short time later, have been engaged. Last month, Gary proposed to Jenelle and she accepted, but the engagement was called off a day later when Gary learned Jenelle was cheating on him with her now ex-boyfriend, Kieffer Delp, 22.

Nontheless, as previously reported, the couple has now gotten back together and as of yesterday, they have decided to give their engagement another go.

Meanwhile, an apparently hurt Kieffer responded to Jenelle’s tweet with, “Don’t be mean, if [you’re] gonna just leave me alone. I’m happy for [you] girl I wish [you] all the best.”

Do you think that Jenelle is just on a fun ride with whatever man is there at the moment?  For their parts, do Gary and Kieffer really love Jenelle or is she the only way these losers think they can grab a piece of the ‘good life?’

What do you guys think? Will this engagement last? Will the wedding ever happen?