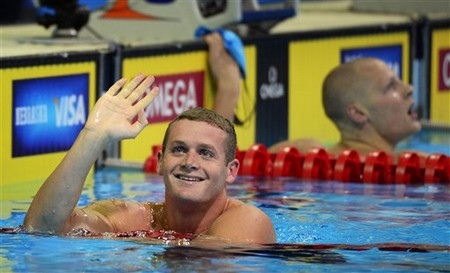 Tyler Clary is an American swimmer and avid DJ. Clary currently holds the American record in the 400-yard individual medley. Tyler has won 10 medals in international championships, including seven silver and three bronze medals from the World Championships, the Pan Pacific Championships and the Pan American Games. Tyler will be competing in the 200m Butterfly Event at the London Summer Olympic Games after finishing second to Michael Phelps in the Olympic trials on June 28.

Tyler looks like an ordinary club DJ, but he is anything but ordinary. The familiar sounds of dubstep can be heard on the video, giving Tyler an unparalleled coolness appeal. Tyler speaks with a familiar eloquence as the catchy dubstep rages on over the interview, “I actually started doing it when I was a sophomore in college. I started spinning house music, would move into Hip Hop and recently my most favorite thing to DJ is dubstep.”

The well groomed swimmer refers to himself as DJ Copasetic – the meaning of copasetic is “very good” – and he is quite the character. He lists Dubstep, Sreamo and House as his favorite things to listen to before he swims. He says, “After swimming there’s a whole lot of things I think I could do. This is one of them.” The video cuts to him cranking out tunes with idiosyncratic DJ maneuvers.

He continues on about the “difficulty” in getting a gig and explains how he wants to perform in LA and Vegas. “If you want to find me on Youtube, search for Copasetic 353.” He says with a cracked smile.

Tyler seems to be more than just a swimmer and we’re guessing he wasn’t content with just being an Olympic athlete. Sigh, how much cooler can this man be? We guess he also saves helpless kittens from trees…

Don’t forget to watch Tyler’s biggest gig of his life this summer at the London Olympics. Let us know in the comments below if you’ll be watching.