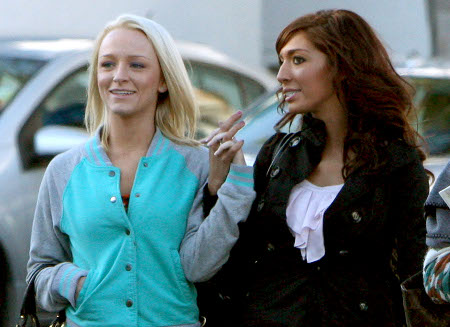 Maci Bookout is, without a doubt, my favorite Teen Mom. She obviously loves her son, puts him first, and avoids all of the drama that the other moms get into (drugs, domestic abuse, CPS intervention, etc). Besides going to college and being a fabulous mom, Maci is also a terrific girl to have as an ex. Instead of driving over ex-fiance and father of her baby, Ryan Edwards, like I would have done, she communicates with him regularly, civilly, and cites son Bentley’s wellbeing as the reason.

But in a sneak peak of next week’s series finale check-up special with Dr. Drew Pinsky, we see Maci fighting with Ryan’s now ex-girlfriend Dalis Connell. Dalis, who seems totally out of Ryan’s league, has always been a pretty good girlfriend. She has never been shown lying or manipulating, and often encourages Ryan to, basically, grow a pair and be a good father. Apparently, Dalis has a few insecurities, because she starts complaining that Maci is “always” texting Ryan and trying to get back together with him.

Dalis explains the problem, “I respect her as mother, and I always will. And I’m very polite to her. You can’t just be his mother and do ex-girlfriend tendencies.”

Yeah, it’s those damn ex-girlfriend tendencies that really get her! Now, ignoring the fact that we know Dalis and Ryan have broken up, this seems like a ridiculous claim. First, because we know that Maci cannot stand Ryan, because he’s an unemployable, uneducated, selfish ass hole who lives with his parents, drives a pumped-up douche truck, and wants to take Maci to court for “living in sin” with her then boyfriend Kyle. Second, because, well, all of the above. It’s worth repeating. The best thing Ryan ever achieved in his life was producing sperm and becoming a father. That was his peak.

I guess we will have to wait until next Tuesday to find out how Ryan is going to wriggle out of this lie. Who knows — maybe he and Dalis will actually break up on stage for all of us to watch! Do you think Maci wants Ryan back?