BY Annemarie LeBlanc on January 22, 2012 | Comments: 3 comments
Related : Once Upon A Time, Recap, Television 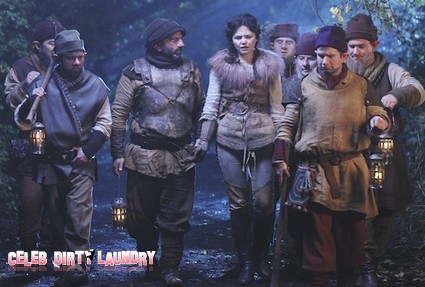 While we are not sure how Hansel and Gretel will tie in to the ongoing saga in Storybrooke what we do know that it seemed very important Regina to get them out of town and not allow them to be reunited with Michael their father.  We got to meet a new character at the end of the show, we don’t know who he is – but rumor has it he is going to be a live interest for Emma.  If you missed last week’s episode you can read our recap here!

On this week’s episode of ‘7:15 AM’ Mary Margaret and David continue to grapple with their unrequited love.  Will we see their first kiss?  Emma and Regina grow suspicious over a mysterious new stranger in town.   Meanwhile, in the fairytale land that was, Snow White yearns to ease her breaking heart as Prince Charming’s wedding to King Midas’s daughter approaches.

We will be live blogging the show with all the up-to-the-minute details at 8PM EST so make sure to come back to this spot and watch the show with us.  While you wait for the recap you can watch a sneak peek video of the episode here!

Tonight’s Episode:  Henry comes up to the stranger and asks him what the box is on his motorcycle and he tells him something he needs to do what he came to town to do. The stranger warns Henry to hurry to school because there is a storm coming… . Regina comes out and sees Henry talking to the mysterious strange and asks him who he is.

Mary Margaret is rushing to get ready for school and she is late. She was supposed to get their early to help the kids for the science fair.  Mary Margaret rushes out the door and heads to the restaurant and sits down to read a book and David comes in. He sees Mary Margaret and says hello to her. She asks him how the animal shelter is going. Clearly she was not heading to school early – she was trying to catch a glimpse of David.

Emma comes in the restaurant and calls her on it and she admits she comes to see David and Emma asks if she is stalking him. Mary Margaret admits she cannot get him out of her head. She wishes there was a magic cure for love.

Snow is in a boat and Rumpelstiltskin talks to her and she tells him her boat is not for sale. Snow tells Rumple she needs a cure for a broken heart. Rumple tells her he cannot make the man she longs for love her. Snow tells him she does not want him to love her – she wants to forget him. Rumple tells Snow that he can help her with – he gives her a liquid and tells her the liquid will make her forget Prince James. He tells her love has killed more than any disease. He tells her the cure is a gift to her. He takes a lock of her hair, that is all he wants. He tells her to drink the cure in good health.

In the fairytale there is a feast going on. King Midas sent a crown. The crown could feed the whole kingdom. Prince James’ father tells Prince James he knows he has agreed to marry Abigail but he knows his heart is not there. Prince James tells him at least he is doing what he wants. His father tells him to get Snow out of his head because nothing is stopping his wedding to Abigail.   Prince writes a note to Snow White and sends it by carrier pigeon to her.

Mary Margaret is walking in the forest and she finds a dove that is trapped in net. She brings the dove to the vet who tells her the dove is a little dehydrated but okay. However, she must find it’s family or it will be alone. David is at the vet and tells Mary Margaret there is a storm coming and she needs to be careful. Mary wants to return the doe to its flock.

Regina goes to Emma and she tells her there is a new person in town and she wants her to find something out about him and what he wants. She tells Regina there is no law against coming to Storybrooke. Regina tells Emma she will do it because he was talking to Henry in front of her house and they both care about the boy. Emma agrees to check into him.

Snow White gets the message from Prince James telling her that he is always thinking of her but he is getting married. He asks her to come to him and show him they can be happy. If she does not come he will go through with the marriage.

The storm is getting worse and Mary Margaret is driving to return the dove to its flock.

Snow White is headed to the castle in disguise and brings a basket of flowers and tells the guard they are from King Midas for Prince James’ wedding. She gets into the palace and sees Prince James and a guard grabs her and takes her to the dungeon and tells her the King will decide her fate as he takes the note that Prince James sent to her.

Snow tries to scale the walls of the prison but falls down. She hears whistling and sees a dwarf, Grumpy, and tells her he has tried it all and it is useless. The dwarf introduces himself as Grumpy and Snow tells him there is someone out there she loves and she will not give up.

He tells her he got swindled after trading all his wages for a stolen diamond and got trapped and there is not way out. A voice says ‘I know a way out’ and another dwarf Stealthy comes to help him. Snow wishes him luck and he comes back to let Snow out as well.

Mary Margaret is in the forest and she hears a noise and she thinks it is the dove’s flock she walks to the edge of a ledge and slips down.

Snow White grabs onto a root as she hangs over the ravine. She hears a voice and its David! He says give me your hand and he pulls her up. He asks her if she really thought that he would leave her alone out in the woods. She leaves and David asks where she is going, she runs with the dove tells Dave she has to return it to the flock – the girl is obsessed! David tells her it is not safe the storm is getting worse and they have to go.

Snow and the Dwarfs separate – the dwarfs head out of the castle and the King sees him and they shoot Stealthy. The King asks where the girl is and when Grumpy won’t answer – says what girl? – they go to kill him and Snow says ‘Looking for me’ The King tells the dwarf to leave and he tells Snow White they have to talk.  The storm is getting really bad with wind and rain and Mary Margaret, David and the dove come to an empty house. David breaks in.

Emma comes into the café and sees the stranger and tells him they have to talk because he is suspicious. She asks why he was outside Henry’s house and talking to him. He tells Emma his bike broke down. She asks him what is in his box and he asks if it is illegal to carry a box. He tells Emma that he is going to make her wait. He is going to carry it around for ages making her guess what could possibly be in the box. However, he tells her if she lets him buy her a drink he will tell her right now.

David tells Mary Margaret he did not know Katherine was pregnant and they were not trying. All of a sudden Mary Margaret hears the rain has stopped and she tells David she has to get the dove out. She runs out and finds the flock did not leave and she throws the dove up to join her flock.

David is with Katherine and asks if there is anything he wants to tell her. She tells him since he came home ‘he is here, but not here.’ She tells him she wants a family and she wants children. She tells him she thought she was pregnant, but she is not pregnant and she thinks that is for the best. She asks him if they can see Dr. Hopper and give them the best chance. David tells her he knows they should be in love and he wants to make it work. She tells him it is 7:10 and if he wants coffee before work he should leave. He tells her no, let’s have breakfast before I leave.

Snow White is walking with the dwarfs and Grumpy asks if she is okay and she says no. He asks if she found him and she says, no – she lost him. She asks him where they are going and the dwarfs tell her they are taking her home – everyone lost someone today. They are now seven instead of eight. Snow goes to take the cure that Rumpelstiltskin gave her and Grumpy stops her and she tells him she wants the pain to go. He tells her the pain is who he is – it makes him Grumpy – and convinces her to put the ‘cure’ away- at least for now.

The dwarfs come back and tell Snow White the Wedding has been cancelled and Prince James is not getting married – yeah!! But Snow White says WHO? – she has drank Rumpelstiltskin ‘cure.’

David comes into the café at 7:45 and sees Mary Margaret and then runs out. Mary Margaret runs after him and says it is 7:45 you are not suppose to be here. They both tried to avoid each other. They look at each other and fall into each other’s arms for a passionate kiss. Regina is looking on looking none too pleased… .

That’s a wrap!!  We found out a lot of info this episode and we saw a preview of next week’s episode and it looks like it is going to be great!  Make sure to join us next week – for now, have a nice week CDLers!