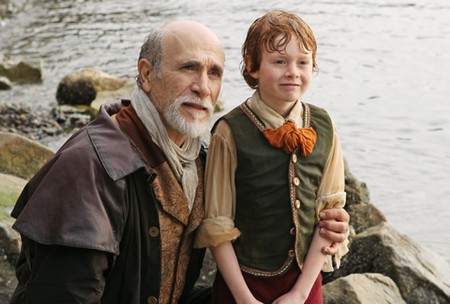 Once Upon A Time airs tonight on ABC in the second to last episode of the season.  Tonight’s show is called ‘The Stranger’ and we will be live blogging it with all the up-to-the-minute details.  On last week’s episode Mr. Gold attempted to uncover the true identity of August, Emma confronted Regina about her involvement in Kathryn’s disappearance, and David tried to apologize and reconcile with Mary Margaret.

Meanwhile, in the fairytale land that was, Rumpelstiltskin agreed to comply and do whatever took if his son could find a way for him to safely give up his powers and turn back into the loving man he used to be.  If you missed the episode you can read our full and detailed recap here!

On tonight’s episode August promises to enlighten Emma and take her on a journey that will show her how she can beat Regina, and possibly take custody of Henry; and with Mary Margaret returning to work, Regina puts a plan in motion to seduce David.

Meanwhile, in the fairytale land that was, with the Evil Queen’s curse about to strike, Geppetto agrees to a plan that will save Snow White and Prince Charming’s daughter, but with a proviso that could also save his own son.

Tonight’s Episode: Tonight’s episode opens with August installing a dead lock Mary Margaret’s door.  She hopes that will keep Regina out.  Emma tells August and Mary Margaret that she has hired Mr. Gold to go after Regina to get custody of Henry.

Henry calls Emma on the walkie-talkie he needs to see her at Granny’s dinner, it is emergency.

Emma goes to the diner and asks Henry what the emergency is-he wants to know who else knows that they hide storybook at the Sheriff’s office. Henry tells Emma that someone change the book there’s a new story added.  Henry tells Emma that the new story is about Pinocchio and everyone knows how that story ends or maybe there’s more to it.

Geppetto wakes up on the shore with the life preserver and screams for his son. He sees him lying face down in the water. He runs after him-he cries he wishes that he could have saved Pinocchio. The blue fairy appears and tells Geppetto he can still save him-he begs her to save him.

The blue fairy turns Pinocchio into a boy and he wakes up. Pinocchio is excited because he is a real boy now. Geppetto thanks the blue fairy. And tells her he doesn’t know how I can repay her. This is all he ever wanted. The blue fairy tells him to go and live their life together as a family. She reminds Pinocchio to be brave truthful and unselfishness – as long as he remembers that he will always remain a real boy.

August is in his room sitting at desk and staring at and on his desk is the hat Pinocchio had on in the fairytale. August calls Mr. Gold and tells them they need to meet it’s about Emma, and there is a problem.

As August is walking he falls back and he sits on the hassock, he lifts up his pant he has a wooden leg.

Regina comes to visit Emma and tells hers she is glad is back at school. Regina is looking for Henry he forgot his lunch. Mary Margaret tells her he is with his mother. Regina asks if there is a problem. Mary Margaret tells Regina she forgives her even if she cannot admit what she did-she tells her that her life must be filled with incredible sadness if her only joy is to destroy everyone else’s happiness. She tells Regina despite what she thinks it will never bring her happiness to hurt other people. It will only leave a giant hole in her heart.

Henry sees his mother and asks what she is doing there-Regina gives him his lunch box. Regina tells Henry it is  time for a change-Regina tells Henry it’s time for him to go to a new class and a new teacher. Regina asks if Henry believes she framed Mary Margaret and Henry responds yes. He tells Regina he knows she is the evil queen but her plans will fail.

August wants Mr. Gold to steer Emma towards him when she comes to ask for legal advice. August assures him he can get her to believe.

Emma tells Mr. Gold she must save Henry she must get them him away from Regina. Mr.Gold tells her he will not take the case-the only thing that will happen in the end is that Henry will suffer.

Mr. Gold tells Emma again he is not the man to help her beat the mayor. Emma goes to visit August, he asks her if everything is okay she tells him no. Emma tells August that she wants to see the big picture now.

David sees Regina she has the hood of her car open and he asks if she has car trouble. She tells him it has not exactly been a banner day. Her battery is dead and he offers to give her a ride home.

Regina thanks him for being her knight in shining armor. She asks him to stay for dinner she has bought more than enough for her and Henry and she’s making lasagna.

When Regina gets in the house there’s a note for her-the note is blank but she tells David is from Henry and me spending the evening with a friend.

In the fairytale Geppetto, Pinocchio and Jiminy cricket have followed the blue fairy to the magical enchanted tree. Geppetto says he can make a vessel out of the tree for Snow White’s daughter. Geppetto promises he will build the wardrobe on one condition, if Pinocchio can take the second spot in the vessel. Jiminy cricket tries to interfere but Geppetto tells him to stay out of it.

Geppetto tells the blue fairy Pinocchio goes or no one does. Geppetto asks if they have a deal or not.

The blue fairy meets with Snow White and Prince charming and tells them that Geppetto can fashion a vessel for one spot. She tells the couple that the tree can only protect one person. They must make a choice.

August and Emma are on his motorcycle-he tells her he’s taking her on a trip so he can tell her his story they are leaving Storybrooke.

David tells Regina that it was the best lasagna he ever ate.  Regina tells them that she is grateful he helped her when her car broke down. David asks Regina how she found him. She claims she found him on the side of the road unconscious and the doctors claimed if she found him 10 min. later he would’ve been dead.

Regina leans in to kiss David, David pulls back and says he hopes she did not get the wrong idea. He says he likes a relationship like it is. David gets his jacket to leave. He thanks her for dinner and leaves.

Regina is looking in the mirror and takes her wine glass and slams it into the mirror breaks it.

Snow white is in the labor-the blue fairy goes to Geppetto and tells him that plans have changed-they need the vessel now.

When the blue fairy leaves Geppetto asks Pinocchio to go into the vessel-Pinocchio does not understand. Geppetto tells Pinocchio he must look after Snow White’s child in the new land. In 28 years he must make sure Snow White’s daughter believes. He makes Pinocchio promise him.

August and Emma are driving down the highway, he takes her to a diner. She wants to know what they are doing at the diner.   August says he thinks she knows. This is the diner where Emma was brought as a baby. August tells Emma this is her story and his story. He was the seven-year-old boy who found her.

Pinocchio gets out of the vessel/wardrobe in the tree-he hears noises and tries to jump back in the tree but the tree pushes him out.

There’s kind of force field around him and all of a sudden he hears crying and he looks in the tree and there is a baby.  He picks the baby out.

Emma asks August why they are in the woods. Emma tells him he is not the seven-year-old boy who found her because she was found on the highway. August asks, if it ever occur to her that the boy lied? August tells her when he found her she was wrapped in a blanket and at the bottom of the blanket the name Emma was embroidered on it.

August runs after her and he falls. She asks what is wrong with his Leg-he says it is because he failed. August tells Emma he was supposed to be there for her and he wasn’t. August tells her if  the tree won’t make her believe maybe this will he lifts his pant leg up and shows her his wooden leg.

Emma tells them then you’re all screwed.

Pinocchio is playing with Emma in her crib. They’re in a home for children. One of the children comes up to Pinocchio and shows him money he stole. He asks Pinocchio if he wants to go with the other children they are going to escape with money. Pinocchio tells him he promised his father he would take care of Emma, and he asks if he can take her with him. The boy tells him no. Pinocchio decides to go with the boy and says goodbye Emma.

August goes up to his father’s workshop and he is working on a clock. August tells him how to fix the clock. He asked August who taught him to fix clocks and he tells him his father.

The man tells August his father must be proud of him and August says NO he let him father down – he tells the man that he made a promise to his father and he hasn’t kept it. By the time he tried to keep it, it was too late.

The man tells August if his son tried that would be enough for him.

August asked the man how he feels about taking on an assistant. He lets August know he cannot pay and August says, that’s okay. He just feels like fixing things.  The man welcomes August into his workshop.

Henry is sleeping and Emma calls him on his walkie-talkie – Code Red! Emma tells Henry she needs to talk to him about them.  Henry comes out to her car and tell Emma that if his mom sees him talking to her she will get really mad.

Henry says, “More than anything.” Emma says  buckle up they are leaving Storybrooke they drive away.