BY Annemarie LeBlanc on February 13, 2012 | Comments: one comment
Related : Once Upon A Time, Television, Wrap-Up 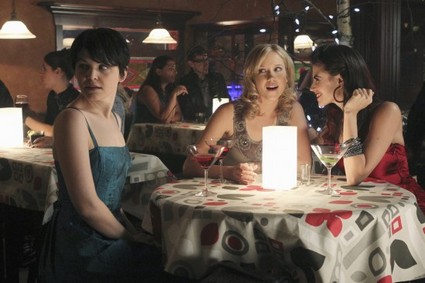 Last night was another new great episode of Once Upon A Time and we recapped ‘Skin Deep’ for you here.  This week mixed some great plot with silly Valentine’s Day mush. Forget the mush – who cares – it is so silly.   In our wrap-up we have some observations of last night’s show and some questions.

The main point of this week’s episode was to up the ante in the power struggle between Gold and Regina. Two significant outcomes – firstly – Gold admits openly to Regina that he KNOWS he is Rumpelstiltskin which entails that he knows EVERYTHING! Also of great significance is that although Gold has more magical power than Regina she has Belle – his true love and greatest regret.

How will Regina try to leverage her knowledge that Belle lives against her arch-enemy, Mr. Gold?  Will Regina try to buy Gold’s co-operation by threatening to harm Belle?  One thing we know is that Regina holding Belle for ransom is a big part of where this story is headed.

I think it was a wise move on the part of the producers of the show to heighten and justify the great animosity between Gold and Regina. Prior to this Beauty and the Beast episode all we had to go on to explain Gold’s and Regina’s history was Rumpelstiltskin’s interactions with the Evil Queen’s guards. Not that that wasn’t enough – but now they have made it extremely personal.   The Evil Queen was responsible for breaking Rumpelstiltskin’s heart – and she now holds the key to its possible mending!

There was not much screen time for David and Mary Margaret but Mary Margaret finally told David she could not keep up what they were doing.  She told him to go back to Kathryn.  I was glad she finally did the right thing.  How about you?  Rumor has it next week Kathryn slaps Mary Margaret!

The next episode of Once Upon A Time is airing until February 19th, 2011 and it is called ‘Whatever Happened to Frederick.’  In the episode Regina tells Kathryn that David has been having an affair, while Prince Charming must resist a temptation during his search for Snow White.   If you want to see some spoilers and a sneak peek video go here!

Make sure to come back and visit us February 19th, 2012 when we will be live blogging the episode! In the meantime, let us know what you thought of tonight’s episode and the answers to our questions in the comments below!