BY Annemarie LeBlanc on January 16, 2012 | Comments: Leave Comments
Related : Once Upon A Time, Television, Wrap-Up 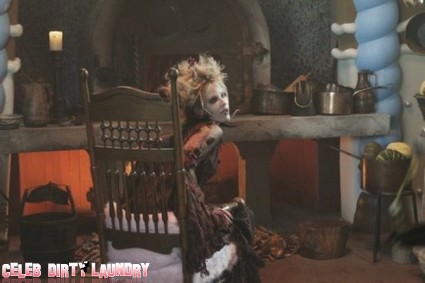 Last night was another new great episode of  Once Upon A Time and we recapped it.  The episode was interesting because we got to learn more about Emma. They used Hansel and Gretel to reveal some of Emma’s past.  In our wrap-up we have some observations of last night’s show and some questions.

Hansel and Gretel are sent into the Blind Witch’s house by the Evil Queen.  The Blind Witch was played by Emma Caulfield (Buffy The Vampire Slayer) and we did not get to see much of her but what we saw was great.  Did you like Emma Caulfield as the blind witch?

Mr. Gold (Robert Carlyle) knows more than he’s letting on. When Emma (Jennifer Morrison) came into his shop to find out the name of the compass owner, he consults a piece of paper and tells her the name of the person.  But we later find out the paper was blank, so it seems Mr. Gold knew exactly what Ava and Nicolas’ story was.  We did not get to see much of Mr. Gold but he was fabulous as usual.

Towards the end of the show Ava and Nicolas were reunited with their father.  Do you think we will see more or them or were they just in the show so we could get more background on Emma?

Ever wonder where the Evil Queen got the apple that she poisoned Snow White with?  Well last night it was revealed that Hansel and Gretel got the apple for her from the blind witch.

While we are not sure how Hansel and Gretel will tie in to the ongoing saga in Storybrooke what we do know that it seemed very important Regina to get them out of town and not allow them to be reunited with Michael their father.   Of course Regina being purely evil might simply wish the children and father to remain disunited out of pure meanness.

Emma decides to tell Mary Margaret (Ginnifer Goodwin) that Henry thinks she is her mother and Snow White.  After Emma leaves Mary Margaret picks up Emma’s baby blanket and smells it and I was sure she was going to remember Emma was her child.  Did you?

At the end of the show a mysterious stranger arrives in town.  Emma says to Henry, ‘I thought strangers did not come to Storybrooke?’ and Henry replies, ‘they don’t.’   I wonder who the mysterious stranger is, one thing I know for sure he will be important?  Do you have any guesses on who he is?

What did you think of tonight’s show? Any observations we missed? Sound out in the comments below and let us know your thoughts?

Make sure to come back next Sunday when we will be cover episode 10 called ‘7:15 AM’  – Mary Margaret and David continue to grapple with their unrequited love, and Emma and Regina grow suspicious over a mysterious new stranger in town. Meanwhile, in the fairytale land that was, Snow White? yearns to ease her breaking heart as Prince Charming?’s wedding to King Midas’ daughter nears.

Make sure to stop by because we will be live blogging the episode with all the up-to-the-minute details.