Once Upon a Time Season 2 Episode 2 We Are Both: Preview and Spoilers!

BY Nicholas Sanford on October 6, 2012 | Comments: Leave Comments
Related : Once Upon A Time, Preview, Spoiler, Television 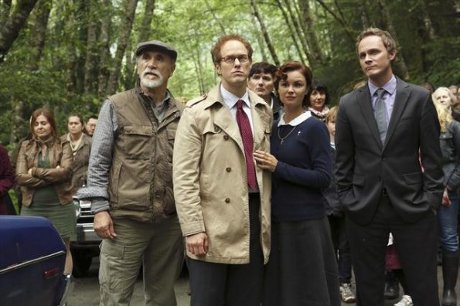 Once Upon a Time season 2 is just getting underway, and already we’re beginning to see the lives of these fractured fairy tale characters take turns for the worst. Magic has returned to Storybrooke, and things can only get more tragic, more dramatic, more maniacal, and more magical from here on out. We love spoilers here at CDL because, like many of you, we just can’t wait a week in between installments; however, if any type of spoilers or previews (even small ones!) make you uncomfortable, then I give you full permission to focus your attention elsewhere.

On this Sunday’s episode of Once Upon a Time (OUAT), which is currently titled “We are Both,” Prince Charming runs onto the Town Hall front lawns desperately searching for Mother Superior (Blue Fairy), who is actually one of the fairies who helped send Emma through to Storybrooke via the magical tree. Prince Charming asks if there might be another one on the other side; she says it’s possible, but that she doesn’t know, and, without any fairy dust to guide them, there’s no way of knowing. Plan Find-a-Magical-Tree is clearly and quickly shot to hell. Geez, fairy-girl, why ya gotta be such a pessimist? Prince Charming is just trying to save the world and stuff!

Grumpy, one of the dwarves, comes storming in alongside all the other dwarves. Sneezy is by his side, and his Fairy Tale Character Dementia has returned. He can’t remember his Story Book character. He is lost again. Grumpy says that as soon as a character exits the town — crosses over the threshold that separates Storybrooke from the outside world — their memory is masked, just like it was when Emma first entered the scene at the start of last season. And guess what? Coming back through the threshold doesn’t fix it. Terrible news!

The town is in an uproar, and they’re looking at Prince Charming to be a leader, a man brave and smart enough to save them from this horrible, magical ordeal . . . and maybe even get everyone back home. To their real homes! He’s going to try to devise a plan, but, as he admits to Red, he’s not quite sure what that is yet. So, will Prince save Storybrooke, or will evil Regina continue spinning her cursed, black magic for her own selfish ways?

The title of this episode, “We are Both,” beautifully sums up the current state of these characters. They are trapped in a world knowing that they belong to another world entirely, they now know their memories have been at odds with each another, and their identities continue to be challenged each episode. They are both. Make sure to catch OUAT on ABC at 8/7c. Before that, let us know what you’re most looking forward to in this upcoming episode!