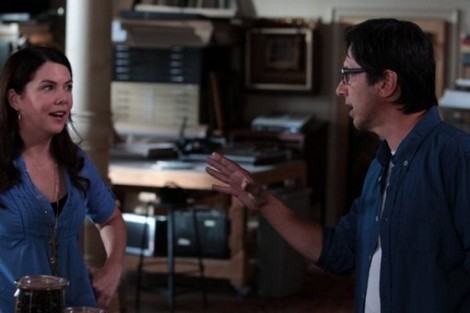 NBC’s popular drama Parenthood returns tonight with a whole new episode.  Tonight’s second episode of the 4th season is called ‘Left Field.’  On tonight’s show as the family adapts to their new son, Julia communicates her love in an unusual way to Victor. Meanwhile Crosby and Jasmine work as a couple to add structure and boundaries to their marriage. If you missed last week’s premiere episode you can read our full and detailed recap here!

On last week’s show called “Family Portrait” the Braverman family gathered for a family portrait before Haddie departed for college, while Kristina, Adam and Max had a hard time digesting the new change. Meanwhile, Julia and Joel struggled to adjust to their newly adopted son’s behavior and worried about their family’s future.

Tonight’s episode looks like it is going to be great and you won’t want to miss it, so be sure to tune in for our live coverage of NBC’s Parenthood at 10:00 PM EST! While you wait for our recap hit the comments and let us know what you thought of the premiere of Parenthood last week?

Tonight’s episode: Jasmine and Crosby are making out on the kitchen floor when Crosby gets a text from Adam who can’t figure out why he is not answering. Kristina is looking at dogs but Adam thinks they are a royal pain and will crap all over the house. Kristina is reading that research shows that a dog would be good for Max and his autism.

Sarah and Zeek Drew off for his first day to his senior year. Julia calls Victor to get ready for school but he doesn’t feel well, so he stays home and she takes Sydney  to school, Joel stays home with Victor who wants to lay on the couch.

Adam, Amber and Crosby are at work; Adam’s calendar is beeping and Crosby is annoyed, it’s Kristina and Adam has her schedule on his phone.

Drew’s girlfriend Amy tells him that she met a guy over the summer and it’s serious enough that she wants to break up with him.

Julie calls home to see how Victor to see how he is doing, he plays up his not feeling well to her while he is playing video games. Meanwhile, Sarah is at her new job with Hank when Drew arrives from school. Sarah asks Drew where Amy is and he tells her that he doesn’t want to talk about it because she broke up with him, on the first day of school.

Crosby is at home and tells Jasmine that Adam drove him crazy with his ringing schedule and tells him that Adam and Kristina even schedule sex and it’s called “funky town”. Kristina brings up the subject about the dog to Max and Adam is not happy that he now knows about it before they even made a decision.

Julia takes Victor’s temperature and even though he doesn’t have a fever, he still claims he is sick. Joel has to get back to work and can’t stay home another day. Sydney claims she doesn’t feel well either but when Joel reminds her how much fun she is going to have in art class, she forgets that she is supposed to be sick.

At dinner, Sarah tells Drew she is worried about him and tries to give him advice in front of Zeek and Drew isn’t impressed.

Kristina, Adam and Max are visiting with a bunch of dogs and Adam doesn’t like it when he gets interviewed by the breeder and she tells him that the price is $1200.00. Max starts to get anxious and wants them to write a cheque right away. Later at home Adam tells Kristina that he wasn’t impressed that they were interviewed and he also didn’t like that she told Max about the dog and completely undermined him. Kristina tells Adam that she will do anything to get the dog, even a round of “funky town”. There’s a phone call, it’s the breeder and she sold the call. Adam just lost his “funky town”.

Max wakes up Kristina and Adam, he made a list of why they have to have the dog. Adam tells Max that the dog was sold, he is really upset and Adam leaves him to take a shower. Kristina is left to deal with Max who can’t deal with this.

Sarah is at work and Hank overhears her talking to her fiancee who is spying on Drew at school. Hank calls Sarah an idiot, her son broke up with his girlfriend and she is all over him. Sarah tells Hank she thinks he didn’t go to prom, but Hank says he did because he was cool and he even got laid. Hank goes on to tell Sarah that Drew should sleep with his girlfriends best friend.

Julia actually did stay outside the school all day in the car and during recess Victor sees her.

At home, Crosby forgot to pick up Jabbar and Jasmine is furious. Jasmine speeds all the way there and tells Crosby that this is why people have schedules, so they don’t forget their kids at school. Jabbar is fine, he was still inside the school and sitting with a teacher.

Hank is with Drew and he tells him about when he was dumped, he was miserable and then he wrote her a terrible song. Hank goes on to tell him that he is never going to understand women and it’s ok to be sad. Sarah walks in and want to know what they are talking about but neither will really say anything.

Adam is home and wants to know if Kristina is fine. She tells him that Max screamed for forty five minutes and she misses Haddie. Adam misses her too and doesn’t know if they can replace her with a puppy, but he is willing to try.

At home, Sarah drills Drew again about his conversation with Hank. She tells him that he is deeply troubled and has weird views about women. Drew says that he just told him it is ok to be sad.

Julia is up, it is three in the morning and Joel wakes up to find her. Julia tells Joel that she stayed outside the school all day to get Victor to go into the school. Joel understands why she did and thinks she is amazing.

Today is the big day, Max is going to get his dog. Julia is getting ready for work and Victor walks in to talk to her, he wants to know why she stayed at the school yesterday, she tells him that in this family when they say they are going to do something, they do. Victor thanks her.

Sarah is at work, she tells Hank not to talk to her son about personal stuff, then she thanks him. Sarah brought Hank chocolate brownies and after he tries them, he tells her they are mediocre.

Jasmin gets a text, Crosby synched their calendars. Meanwhile, Kristina is at the doctor’s office, she is getting a mammogram. The doctor gives her the results and it doesn’t look good, at the same time Adam is with Max getting his puppy.

Kristina shows up to join Adam and Max, Adam knows something is wrong and when she tells him, he grabs her and hugs her.

The end! Wow, that was two awesome episodes in a row, this season is better than ever!