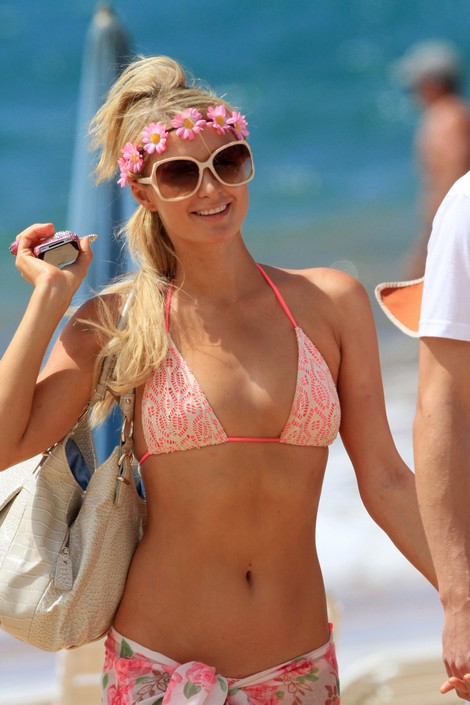 Paris Hilton looking fit and fab was spotted on the sun drenched island of Maui yesterday (September 22,2012).  Paris and her friend Spanish model River Viiperi were seen walking hand and hand as they arrived at the Maui airport.

The couple were later seen relaxing and enjoying their holiday on the beach.  Paris was rocking a pink string bikini, a rose printed wrap, white sunglasses and a cream bag from her signature line.   Paris confirmed who the friend with her was on her twitter account and tweeted, “Just landed on a magical island with @RiverViiperi. Can’t wait to go surfing tomorrow! ☺”

Paris is rumored to have met River at New York Fashion Week which she attended with her sisters Nicky last week.  Following the 2013 Marlon Gobel show in the Lincoln Centre, Paris and River were spotted attending several other fashion shows.

Paris recently said she enjoyed being single, “Every woman dreams of getting married and having a family one day, but right now I’m so busy travelling and working I wouldn’t have time for that.”

Paris spent the evening watching Charlie Sheen in Two and a Half Men and Cabin In The Woods which she loved.  She tweeted, ” Love this movie, such a cool concept. So different then any horror film I’ve ever seen. “

Click on the thumbnails below to enlarge 20 photos of Paris and River in Maui.