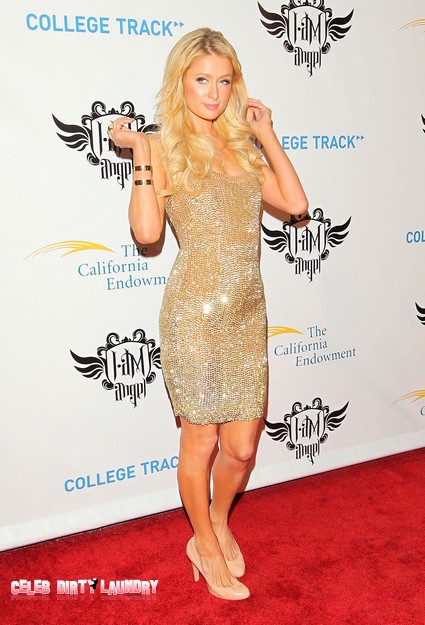 Paris Hilton glitters in a stunning gold dress as she arrives at the First Annual TRANS4M i.am.angel Pre-GRAMMY event to benefit the neighborhood of Boyle Heights at the Hollywood Palladium on February 9, 2012 in Hollywood, CA.  Paris loves the Grammys; we’re hoping that her next album – set to be released later this year – can scoop an award in 2013 for ‘Best Album’.  The socialite was accompanied by, DJ AfroJack who’s producing several tracks for Paris’ second solo-album.

Paris was spotted later in the evening showing some love to Kelis. The pair even took some pictures together before the singer left the party. We love Kelis’ new style – it’s different, querky and stylish!  Paris tweeted about being with Kelis, “Kelis and me at the (Belvedere) RED Pre-Grammy Party last night. Love her! ”  She also tweeted a picture!

Meanwhile, Paris’s album has been confirmed to feature rapper, Flo Rida and even LMFAO – confirmed by Paris herself.

Speaking to MTV, she says: “It’s completely different from my last album. I’m going with a whole new genre. I have Afrojack executive-producing the entire album. So we’ve just been coming up with the most incredible tracks,” she said. “I was just in the studio with RedFoo the other night, so we’re going to be doing my new single with LMFAO.”

Click on the photos below to enjoy more pictures of Paris at the pre-Grammy event!