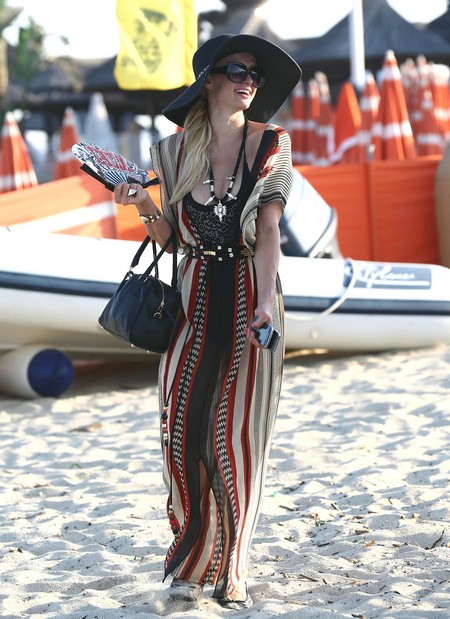 Paris Hilton and Nicky Hilton soaked up the sun during their European trip to St Tropez, France. The socialite Paris was snapped in a black sun hat, beaded beach dress, hot shades and a necklace that seemed to be influenced by an Egyptian motif.  Paris looked ‘simply stunning’ as usual.

Paris is a successful businesswoman, a powerful brand name and one of the most influential celebrities in Hollywood and we know why. Paris never misses updating her Twitter fans about her happenings! She just tweeted: ‘Incredible time last night at Flower Power Party with @NickyHilton. Then danced the night away at Les Caves Roy!’

Paris also added that she will be spending a day of relaxing at the beach!  She later updated her Twitter with, “Another quiet relaxing day at the beach. Lol.” A picture was added of the paparazzi clinging to her.

Meanwhile, her sister Nicky has her problem of her own! She seriously needs to learn how to not overload her luggage as she said in her tweet: “I can’t remember the last time my luggage was not overweight. #airportproblems’.

Last month, Paris was seen with her new DJ gig in her ever fabulous and stylish outfit. And now, the socialite is having her vacation! Oh, this girl is really having the time of her life!

Click on the thumbnails below to enlarge 24 more photos of Paris Hilton enjoying time on the Pampelonne Beach in Saint Tropez, France on July 28, 2012 before catching a boat to her next destination.