Paris Jackson to Glamour: ‘I Want To Move Out of My Dad’s Shadow’ 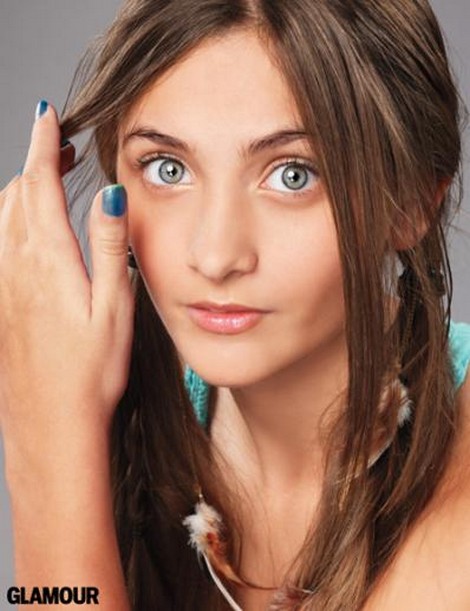 A few days ago we reported Paris Jackson‘s response to the idiotic question, “Who is Michael Jackson.” We realized that, despite her age, Paris is a mature teen with her head on straight, despite her crazy family. In an interview with Glamour Magazine, Paris explains her dreams, and what her family expects of her.

“A lot of people don’t want me to do it, Janet Jackson in particular does not, openly discouraging the idea, but Aunt La Toya believes in me. She heard me play a little guitar and sing, and she started clapping, ‘Oh my God, oh my God.’ She really does encourage me; it’s just awesome of her.”

If I had a vote, I would definitely have Paris stay in school, maybe do the occasional talk show check in, and then, after high school, she can start working! But it sounds like Paris has set a different timeline for herself. Despite being the daughter of the most famous singer in the world, she wants to cast that reputation aside and prove that she can be an actress without any nepotism.

“I love my dad, and I’m proud to be his daughter. I just don’t think the title ‘M.J.’s daughter’ fits me. A lot of people think he’s the only reason I’m making it … but I want to show I do have talent and that I can make it if I try. I want to be my own person. The clique in my class, they don’t like me or my friend because we’re outside of the box. Because we’re not copycats.”

The old soul admits that her siblings and classmates think her taste in old school rock is weird (although she has tweeted support for current sensations Justin Bieber and Chris Brown). “If I had to give advice to other girls, I would say, ‘Hang loose and ignore them. They shouldn’t faze you no matter how popular they think they are.'”

Slow it down, girl! You have your whole life ahead of you. Enjoy being a kid. You will always be known as Michael Jackson’s daughter, so don’t hurry to break into the acting business.