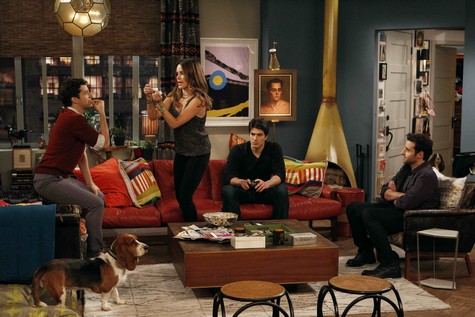 Partners is a comedy that follows two lifelong BFFs, one straight and one gay. Louis (Michael Urie) and Joe (David Krumholtz) are now 30-something partners at an architectural firm and are a true odd couple. Louis and Joe’s endearing and sometimes overbearing ‘bromance’ only complicates the other relationships in their lives—especially with Joe’s fiancé Ali (Sophia Bush), and Louis’ beau Wyatt (Brandon Routh).

The series is based on its co-creators, David Kohan and Max Mutchnik, the Emmy Award winning duo behind Will & Grace who also happen to be real-life best friends.

On tonight’s show after Joe uncovers a sexually suggestive photo of his fiancé Ali with famous baseball player Derek Jeter and tells Louis about it, Ali questions Joe’s ability to keep a secret from Louis. Interwoven throughout the episode is an underlying issue between Joe and Ali – namely Ali’s concern with Joe’s need to confide too many personal details to his BFF Louis – issues that typically ought to remain confidential within a couple. Of course this highlights the issue of whether the real couple is Joe and Ali or Joe and Louis…

The episode also deals with Louis’ over-the-top competitive nature which really made me laugh. Louis is one of those people who just has to win at games no matter what the cost and this leads to some serious trouble for Joe!

Wyatt, my favorite character and certainly the best looking guy on the show takes issue with Louis competitive nature – which he displays during a couple of games of Celebrity. Wyatt understandably experiences terrible insecurity as he feels he may not be able to live up to Louis’ high expectations. This is a result of Wyatt’s almost complete ignorance of pop culture due to his cloistered Mennonite upbringing – and Partners manages to portray this as very funny indeed.

Since Joe and Louis are partners in their own Architectural firm and are best friends they tend to spend an inordinate amount of time together. In fact, the only significant pursuits they enjoy independently are their respective love lives. In real life it would almost seem natural for Joe and Louis to dispense with their significant others entirely and just become lovers. However, since Louis is gay but Joe is straight that is just not going to happen. There exists an underlying tension between each of the primary characters and their lovers due to Joe and Louis’ interdependence. The way the show is structured an alternative name for Partners could well be “We Should Have Been Lovers.”

Whenever people share their working life there is a risk that if they don’t maintain an adequate degree of independence in their person life a sense of cabin fever may develop. Nevertheless with Joe and Louis this just does not seem to be an issue. The two pals just don’t seem to tire of one another and there bond is a close one.

The writers manage to put more laughs into this 30 minute show then you’re likely to find anywhere outside of stand-up comedy. Aside from the one-liners and great puns the plot allows for several amazingly funny gags, tricks, and traps into which all the characters fall, but especially our stars Joe and Louis.

Don’t miss the episode which airs tonight October 8th, 2012 at 8:30/7:30c PM on CBS and join us for a Live Twitter Partners Viewing Party.

One2One Network is hosting a live Twitter Viewing Party for #Partners on Monday from 8:15-9:15 PM ET. We’ll be chatting with real-life BFFs & business partners, Vera Sweeney and Audrey McClelland, and giving away prizes as we watch the third episode, “The Jeter Exception.”

Disclosure: I participated in this sponsored post campaign for One2One Network. All opinions stated are my own.