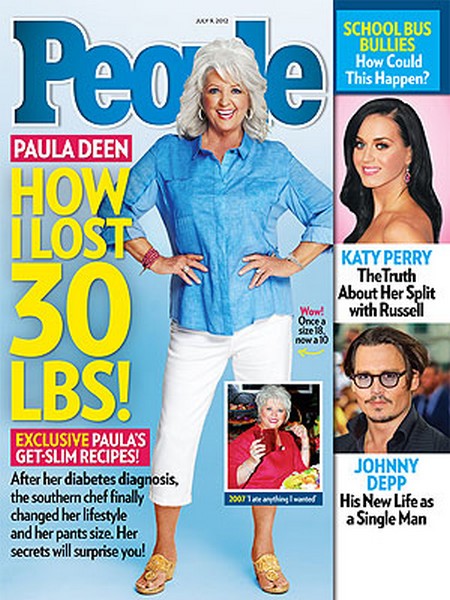 About six months ago Paula Deen came under fire for announcing that she has Type 2 diabetes.  Critics ripped apart her high calorie, down home cooking when she wasn’t actually eating her own recipes. At the time she had said, “I am really shocked because I didn’t choose this. I didn’t choose this to happen to me. When I see things in print, it’s like stabbing me with a knife.”

Deen stepped out of the public eye for a bit and has recently emerged 30 pounds lighter.  This week People Magazine catches up the kitchen whiz and she tells us how she has gone from loaded mashed potatoes to a diet of Greek salads and fish.

“I do think differently now I’m more aware.  It took me a couple of years to get to this point,” says Deen, who learned she had diabetes almost three years ago and faced harsh criticism when she finally announced her diagnosis in January. “If you make a few small changes, they can add up to big results.”

So, what are some of the things that Deen has done to change her diet?  She says she now doubles up on her salads and vegetables while cutting back on the carbs.  She also realizes the importance of exercise and tries to get in a thirty minute walk each day.  Deen says that she is currently feeling fabulous and thinks it is important to now help educate and inspire others who have been diagnosed with diabetes.

One of the things that she has learned is this, “Once in a while you can eat two biscuits — you just can’t do it every day three times a day.”

Pick up the latest issue of People to read more about Paula Deen’s transformation.